I was recently fortunate enough to attend a round table discussion on Innovation in Reward hosted by Juan Alonso (Head of Reward at EBRD).  The BTN holds these sessions from time to time and I have always found them valuable.  This particular session was focused on Reward, performance and EVP, and immediately when introductions were over I realised that I seemed to be the only non-reward professional in attendance, myself being an HR Director with a Generalist background.  So, I thought as we started this was going to be interesting, and it was.  After much thought, I have decided to summarise my views, which were formed with the help of the group of professionals in attendance.

I will not say much about HRIS, except to say that as has I believe always been the case, systems are lagging the trends and requirements of the industry.

When it came to the debate about performance management I was reminded of the talk I gave and an article I wrote on the subject.  Whilst it was fashionable to say that organisations were “Abandoning Performance management” a few years ago it remains clear that what is taking place is a revolution in the PM space, but that some form of comparison or ranking is still required in an environment where one is seeking to include pay for performance in any shape or form.

As the debate progressed I started to think I would find it useful to add some structure and framing to the topic.

Pre c1980 people typically joined the company they retired from after completing their education.  Hierarchical structures offering minutia promotions through levels sometimes as numerous as 20, individuals were paid a salary and typically a DB pension scheme.  As a result loyalty was highly regarded and frequently offered.

From the 1980s onwards companies started to use a multitude of tactics to produce in year results including offshoring, outsourcing, and redundancies, inadvertently and unintentionally altering the psychological contract. (Blanchard &Sinek 2019).

Since then employees have been learning their worth and starting to exercise increasing discretion, with more frequent company moves.  Employees have become better informed and learning how to respond to the shift in psychological contract.

This led in part to that horrible phrase “ the war for talent” which as I have said in previous pieces has in my view done HR more harm than almost anything else.  Mostly because at least up until now there has by and large been no such thing. 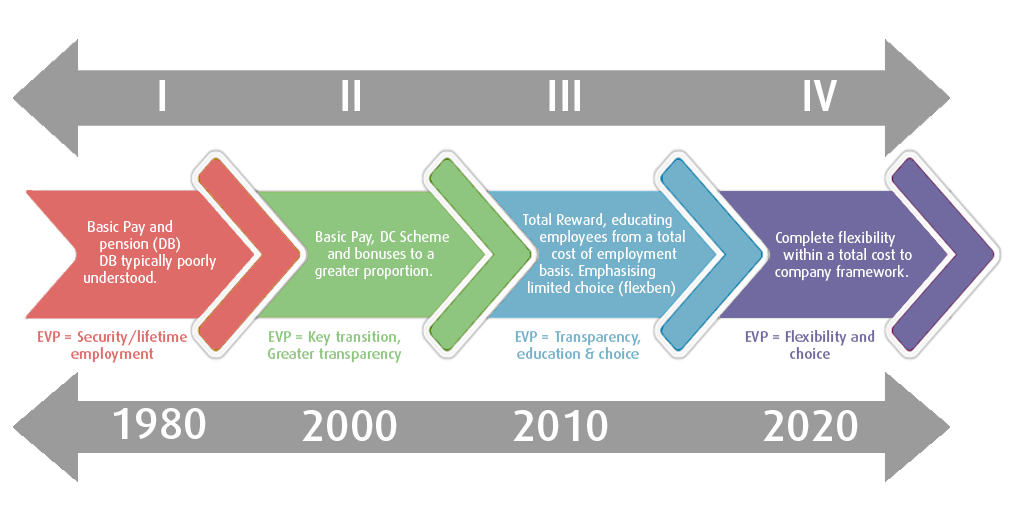 So, does examining the past in this way allow us to predict future trends.  I believe partly it does.

EVP has and will continue to become more expansive as employees are more informed and educated about their options, and used to having a wide variety of choice in nearly all aspects of life.  Accompanied by changing attitudes towards work, employees will increasingly be less tolerant of work/worplaces/managers than has historically been the case.  This includes the fact that increasingly work is done in a collaborative cross functional outside of hierarchy teams which are temporary – clustered around the project/development cycle etc.  Employees will exercise choice over;

~ which brands they want to work for

~ which projects they want to work on

~ which team leaders/managers they want to work for, and

~ will expect to be able to choose how they spend their total cost to company rather than be told.

This ultimate you pay me X and I decide how to allocate it, is the near destination of the current trends in the remuneration space.  Employees will increasingly be unaccepting of bosses and governments deciding how their “pay” should be spent.

Younger employees have seen their parents etc fall prey to continuous reorganisations as CEO’s strive to create in year growth at nearly any cost, and will as a result not show loyalty for loyalties sake.  It will have to be continually earned.  (Blanchard & Sinek, 2019)

HR and Reward professionals need to rapidly adapt for a workforce that is mobile, and will aggressively exercise choice in everything and anything they can.