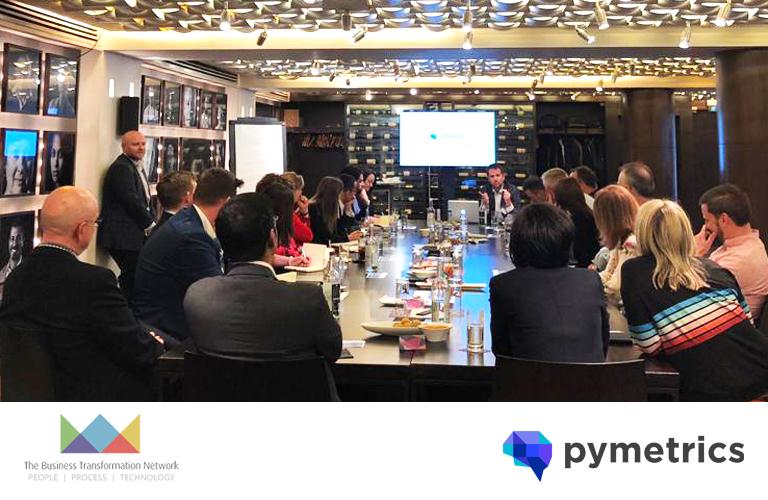 The Business Transformation Network recently hosted an event on ‘Unlocking Talent Potential: Time to change the game’ in partnership with Pymetrics. Pymetrics aim to solve the problem of bias in hiring processes by harnessing the power of Artificial Intelligence (AI) and machines to match people to the jobs where they are most likely to succeed.

The conversation was varied, touching on a wide variety of point around the following questions:

Most organisations in the modern business environment are at least considering, if not implementing, tools that will help automate and remove bias in their hiring processes.

Where and why do we see ‘hiring for potential’ as important in today’s market?

Regardless of the industry or organisation, the people are what makes a company successful, which is why recruitment and potential are so important. Although recruitment is something organisations are well-versed in, ‘hiring potential’ is a new challenge for organisations trying to attract and retain the best talent for their long-term success. The best-identified way discussed to identify potential was by looking at patterns, traits and ways of dealing with situations through a series of gamification based tests, which in turn could lead organisations to begin hiring people they may not have considered previously.

To help organisations further hire for potential in today’s market, we need to understand the expectations of the future jobs, which can help organisations predict what jobs will exist in the future and how we can hire people with the potential to move into them. Skills can be taught, but intangibles like behaviour and attitude can’t, which is where the importance of ‘hiring for potential’ cannot be missed.

Why is spotting potential so difficult, and how can it be done fairly and accurately?

Inherently when hiring, organisations tend to get caught in a cycle of assessing tangibles, as intangibles are harder to measure and represent more of a risk for the organisation, although intangibles are the traits that best demonstrate our potential. By changing the ways in which organisations are testing candidates, changing criteria and embracing potential, we can guarantee a fairer and more accurate hiring process. These new tests can be conducted in an automated process which uses multiple gamified tests to look at traits/personality, making it easier to spot potential outside the normal structure of experience and candidates current skills.

Understanding the difference between neuroscience and psychometrics allows the tests and gamification Pymetrics provide to assess candidates in new ways whilst removing bias, but still allowing us to incorporate the concept of human decision making. There are over 300 types of bias that can be avoided when hiring, by focusing on important characteristics, not skills, through tests which are behaviour driven and auto-updated at least once a year to prevent bias becoming inherent within algorithms. Although organisations think they know what is best for them and the problems they face, there is never a one size fits all answer and we may not be able to progress much further in business without getting stuck in a ‘group think’ mentality about what we need when hiring, which if organisations don’t embrace AI can cause organisations to be incredibly inaccurate, unrepresentative and unfair.

How do you bring on board organisational stakeholders to transform traditional ways of working?

During the event, the majority of conversation around transforming traditional ways of working were based around AI, Machine Learning and Gamification. These concepts aren’t new in themselves, however the way in which we can apply them is. When discussing AI, we need to identify the difference between General AI and Narrow AI. General AI is the concept behind machines thinking and acting like humans EG. C3PO etc, whereas Narrow AI is programmed to perform a single task, using machine learning algorithms to perform the task in real-time with a specific data set. The majority of Pymetrics’ gamified assessment processes are narrow AI, which learns in an accurate way whilst mining your own data to see where the change is required.

In addition to this, organisations main issues predominantly revolve around our understanding, and interpretation of the data that we are collecting and collating, emphasising how we are not exploiting the information to its full potential, especially within the HR space. The traditional data set (such as CV’s) that we’re collecting in our existing hiring processes is difficult to interpret and apply under the time constraints of modern business, whereas AI run gamification tests which identify our potential can help organisations change their direction completely.

Taking this into account, it can be difficult to get people onboard with AI, Machine Learning and gamification internally, as areas like recruitment can feel as though they are losing their position. In a situation like this, it is integral to acknowledge that AI is merely speeding up the traditional process in a more accurate manner, whilst testing potential to provide organisations with a more diverse workforce who are ready to face the future. People will still need to be involved in the process at some point, meaning that some traditional aspects of hiring remain, however in the long-term software like this can make organisations talent attraction and retention processes more efficient.

In short, the most important part of hiring potential is identifying problems your business is facing and the process you can go through to negate these.

Keep your eye out for more events like this at www.thebtn.tv/events

This event write-up is exclusive to The Business Transformation Network.