Transformation Failure – Why it Happens? by Chris Bevan 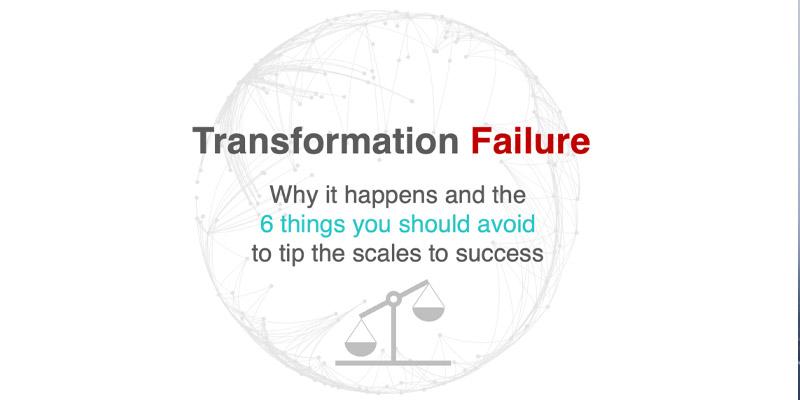 Business transformation, and more specifically digital transformation, has been prominent in posts, articles and blogs published over the past few months. This is not surprising as we’ve seen companies having to respond to different ways of operating to keep going and survive through 2020.

It’s being reported that, as we leave 2020 behind and welcome 2021, transformation should be the priority for most organisations. We agree with this sentiment. Organisations that have had to adapt their operating models in a tactical response now have to move to scale these modifications to operate in the ‘new normal’.

A note of caution. We are all familiar with the often-quoted 70/30 split, “70% of all transformations fail.” We conducted research as far back as 2007 looking at the success rate of transformation programmes and found an article published in 1985 by Dr Alexander from the Cardiff School of Management, asking the question why IT programmes fail? This was the earliest published report we found that introduced this ratio of failure-to-success, which also listed the reasons why they failed and most of these have not changed either!

For over 35 years we have read these reports yet still experts report the ratio hasn’t changed.

At Outvie Consulting we have considered this and built an approach to help organisations ensure they are not part of the 70 percenters. First though, we must be clear what we mean by Transformation and how this is different from Change.

Transform (verb): to change form, appearance, or structure; metamorphose. To change into another substance, transmute.

Change (verb): replace(something) with something else, especially something of the same kind that is newer or better, substitute one thing for another.

An example often used to visualise transformation is how a chrysalis morphs into a butterfly. It is not a caterpillar with wings, but has fundamentally changed form, appearance, and structure.

In the business world, we would propose that a transformation will enable new business models, create new types of digital product or service offerings, and transform operational processes for competitive advantage. All of which require the evolution of the culture, establishment of a new environment and a change of mindset and behaviours.

To undertake a transformation therefore, leaders must understand the scale of the task. Truly transforming your business and/or operating model whilst still delivering the business-as-usual operation can be a frightening prospect and, for the CEO, could come at great personal risk.

Underestimating the size of the task will place your programme into the 70% before you’ve even started!

Even if, as a leader, you’ve grasped the enormity of the task, there are six key reasons why your programme could still end up in the 70% that failure.

Let’s look at these.

Most executive leaders have attained their senior positions by climbing the corporate ladder, maybe in a number of organisations, accumulating experience of running the operation. Mostly, the operational rails were laid down decades ago, or if a start-up, based on structures and a management playbook which was created decades ago, if not hundreds of years ago, starting with Adam Smith (Division of Labour) then Frederick Taylor (Scientific Management).

Exceptions to this rule are the truly digitally native organisations developed over recent years, e.g. Netflix, Uber, Airbnb, Deliveroo and others.

Key characteristics of this operational model, built on functions and vertical structures and leaning to a command-and-control culture, are the need for certainty, evidence, functional precision, and process efficiency. This has evolved a culture where cost control is king. Look at the number of organisations that have gone through a form of transformation and are now in difficulty or administration. Delve deeper into the detail of the “transformation” and what we find is that the outcome has been to strip cost out of the existing operating model, which has made these businesses less resilient and prey to more disruptive competition.

We call these defensive change programmes, where leaders are not fully committed to genuine transformation, but view optimisation as ‘transformation’, and drive behaviours such as expediency and the need for fast results which are usually unsustainable. Most of these companies had fault lines in their operations that have been ignored for several years, yet have chosen the easier route of optimisation when transformation was needed.

In transformation, the comforting structures, certainty, evidence, and the precision of operational day-to-day reality are not available, yet leaders still expect them. Instead, transformation creates ambiguity, uncertainty, innovation, lack of precision (at the beginning) which the operational approach cannot cope with.

Leaders who don’t embrace ambiguity, uncertainty and adopt a transformative mindset, and instead is operationally focused on the here and now will often fail to transform their organisations.

Owing to the way most of our leaders have been “brought up” in business, their “muscle memory” has been created over years and become part of their natural way of thinking and behaving as alluded to above.

From their position remote from the coalface, their experience of how processes work can become out of date, their understanding of how things could get done has become outdated too. This leads to the use of outdated frames of reference on which they make daily operational and strategic decisions. Clinging to these outdated frames of reference makes it difficult for leaders to move away from what has made them successful in the past. Think Arcadia, BHS, Blockbuster, Kodak, Nokia, Blackberry and many more. They fail to see the changes taking place around them, how new entrants are disrupting their markets, how previous barriers to entry have disappeared, and how these have been enabled by new technologies, and changing customer behaviours. Just as in the analogy about the frog sitting in a pan of water that’s slowly being heated. The frog doesn’t realise until it’s too late!

Execution is a critical phase of any programme and it requires discipline and rigour and there are a number of companies that have built fearsome reputations on being preeminent in portfolio execution. Ensuring pace in execution of solutions is critical, however, more important is ensuring that you are executing the right solutions and capabilities.

Our experience shows us that the majority of transformation programmes, move from the strategic development phase straight to portfolio creation and execution. What tends to be missing is the ‘design’.  When we look at the portfolio content, we see projects built bottom up to deliver solutions that might be transforming the technical infrastructure but not the other aspects that make an organisation work.

These portfolios are usually heavily technology-driven designed to support existing structures and built for enterprise efficiency and scale. This is not so risky if incremental change is the objective, but not, if the outcome needs to be truly transformational. As a consequence of rushing to execution, the people affected by the proposed changes are not fully engaged and can’t make sense of why it’s happening, which leads to confusion and resistance.

Leaders that rush to execution, and don’t take the time and rigour to work out the right holistic solutions for the transformation that they need, will often fail to transform their organisations.

In the seventies and eighties, when we were moving from “Information Engineering” to the early days of change management, the mantra was  “It’s not all about the tech, we must include the people and the process”. Absolutely! Process design teams were created with the aim of mapping the technology to the process. Change Management teams were set up to design and deliver the training so people could learn how to use the new processes. However, this often meant that show-stopping challenges were not identified until testing and delivery, usually towards the end of the programme. This led to deadlines missed, budgets spent, and compromises agreed just to get “it” delivered. Unfortunately, this still happens, the people, process, technology concept was correct, but they became siloed and stitched together haphazardly in the latter stages of delivery. Another problem with siloed execution is that it fails to harness the collective wisdom and knowledge that exists in the organisation, which can only be maximised by bringing people together throughout the transformation journey.

Programmes that don’t focus the transformation on the entire enterprise, and just bits of it will often fail to transform the organisation.

The influence of ‘achieving the numbers’ has become so pervasive that a large number of organisations have become so cost conscience and risk averse, that genuine transformation efforts are doomed before they start. Rather than taking some big bets to create new capability to enable new ways of thinking and working, the approach is often to take a number of smaller, safer bets to optimise current ways of working. This also contributes to the “Rush to Execution” as described above.

The PMO becomes an organisation whose culture is formed by Finance, to police the numbers. Excessive governance is implemented, business cases, plans, monitoring against the plans, change requests, resource requests, etc. However, this drives bureaucracy and slow things down. The culture becomes transactional and contributes to low-risk portfolios that fix the issues in the current operating model, favouring incremental change rather than more disruptive transformation. Assurance is vital but it must facilitate delivery, not impede it.

Transformation programmes that fixate on the numbers instead of changing how their people think and work will often fail to transform their organisations.

The level of digital literacy in the Boardroom is usually found wanting. Delegating this to a Chief Digital Officer (CDO) or Chief Information Officer (CIO) does not cut it. Technology is truly an enabler to disruptive transformation and the building of organisational resilience. We are in the fourth industrial revolution where technology must support our business and operating models, support our people to realise innovation and creativity. This cannot happen unless the leaders of the organisation understand the art of the possible and what technology could and should be used. This must be a joint effort, not one passed to the CDO or CIO.

Digital technology is a massive source of disruption and boards need to understand what technology can do so that they can make the right choices to transform their businesses. Blockbuster’s board failed to see the potential of digital on-demand streaming, look what happened to them! It’s not the job of a single board member to change the direction of the business – it requires the whole board.

Boards who don’t take the time and effort to understand the reality of digital technology, what it can do and how it can disrupt , will often fail to transform their organisations.

These six factors are all inter-related and are the consequence of what we call an operational approach to transforming an organisation which is the main contributor to the 70% failure rate.

Watch out for Part 2 of this article which will focus on the 9 components that are critical to grow the 30% of successful transformations.

Chris Bevan is a co-founder and Director of Outvie Consulting Ltd.

Chris has been designing and orchestrating the delivery of transformational change for over 35 years. The past 25 years he has been privileged to lead a number of assignments across different industries, in the UK, USA and Europe.

Frustrated by the way the global branded consultancies deliver transformation, he co-founded Outvie Consulting as a vehicle to promote a fresh, design led approach to supporting business leaders deliver their own transformation and change. He has worked across industries including retail, CPG, telecommunications, finance, manufacturing, supply chain, education, technology and advertising.

Chris is also an experienced NED and Chairman.