So, You Want to Change the Culture by Edwina Pike 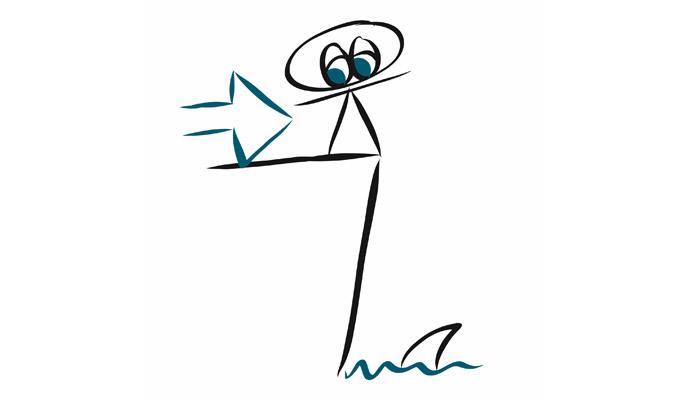 Culture is a word that is often misused, bringing fear and confusion, yet culture sits at the heart of what we do as change leaders and change agents.

We may not realise it, but culture often has the biggest impact on whether companies are successful or not. It sits at the heart of the big successes, and failures. It enables innovation, risk taking, agility, or not.

‘The 2003 NASA report on the Challenger disaster argued that ‘NASAʼs organisational culture had as much to do with [the] accident as foam did’ and that ‘NASA appeared to be immersed in a culture of invincibility, in stark contradiction to post-accident reality’.

This is often the case. Culture matters.

To change culture, the first step is to understand what it is and more importantly is not.

A simple and clear definition:

Culture is the common beliefs, behaviours and assumptions held by a group, any group.

Whether that is your soccer club, your scout group, your parents’ house (which has slightly different rules to the ones you have at home), or your team at work.

Different cultures exist wherever a group chooses a set of common behaviours.

What it is not

It is not the stories, myths, or value statements. It is not free lunches, foosball tables or yoga at lunchtime.

These are the outward symbols but not what forms culture.

Changing these symbols will not change the culture.

To reduce confusion a simple shift is to focus on behaviours, the only outward sign of culture.

Observing and changing behaviours is measurable and actionable.

If you change the behaviours of a group, their underlying assumptions and beliefs will change, and you have changed the culture. 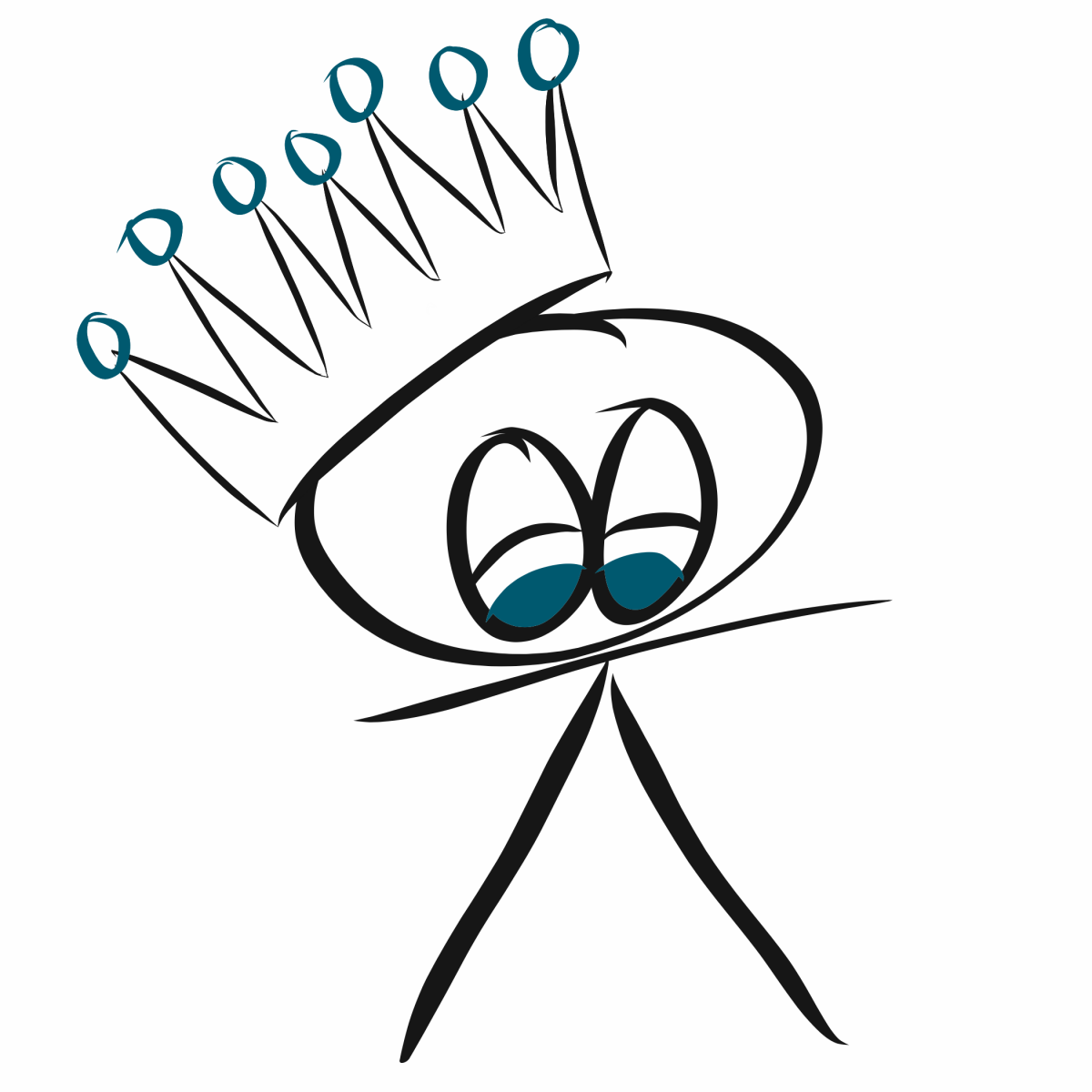 Leaders (yes, us!) set the socially acceptable behaviour of the group, whether we are formally, or informally assigned to the role.

Our teams are motivated to please us, especially when we have the hiring and firing rights, to ensure their safety and survival.

To reinforce our position as part of our social groups we adopt our leaders behaviours to appear more like them and focus on what they focus on.

Where the group looks to a different source for the acceptable behaviours, there is a good chance that we are not seen as being credible. This can often be the case in unionised environments, where the union provides our teams safety needs.

How are the socially accepted behaviours formed?

Our behaviours are a product of the beliefs we have or the assumptions we have made.

We use a seven-step process, known as the ladder of inference, to form the beliefs and assumptions which show up in our behaviours;

We observe data from the world around us, we select facts based on our convictions and experience, we interpret the facts and give them a personal meaning.

We then make assumptions from the meaning, which become conclusions then beliefs.

From our beliefs we take actions, which are our outwardly visible behaviours.

So, how do I change the culture?

Firstly ask yourself whether anyone needs to change behaviour to deliver the outcomes and benefits, the first of the three killer questions. If the answer is Yes, then it is time to work out how big the culture change is.

What leaders do that matters

Behaviour change in a group comes from the leaders of that group. We watch what our leaders do. We put more weight on their actions than on their words. 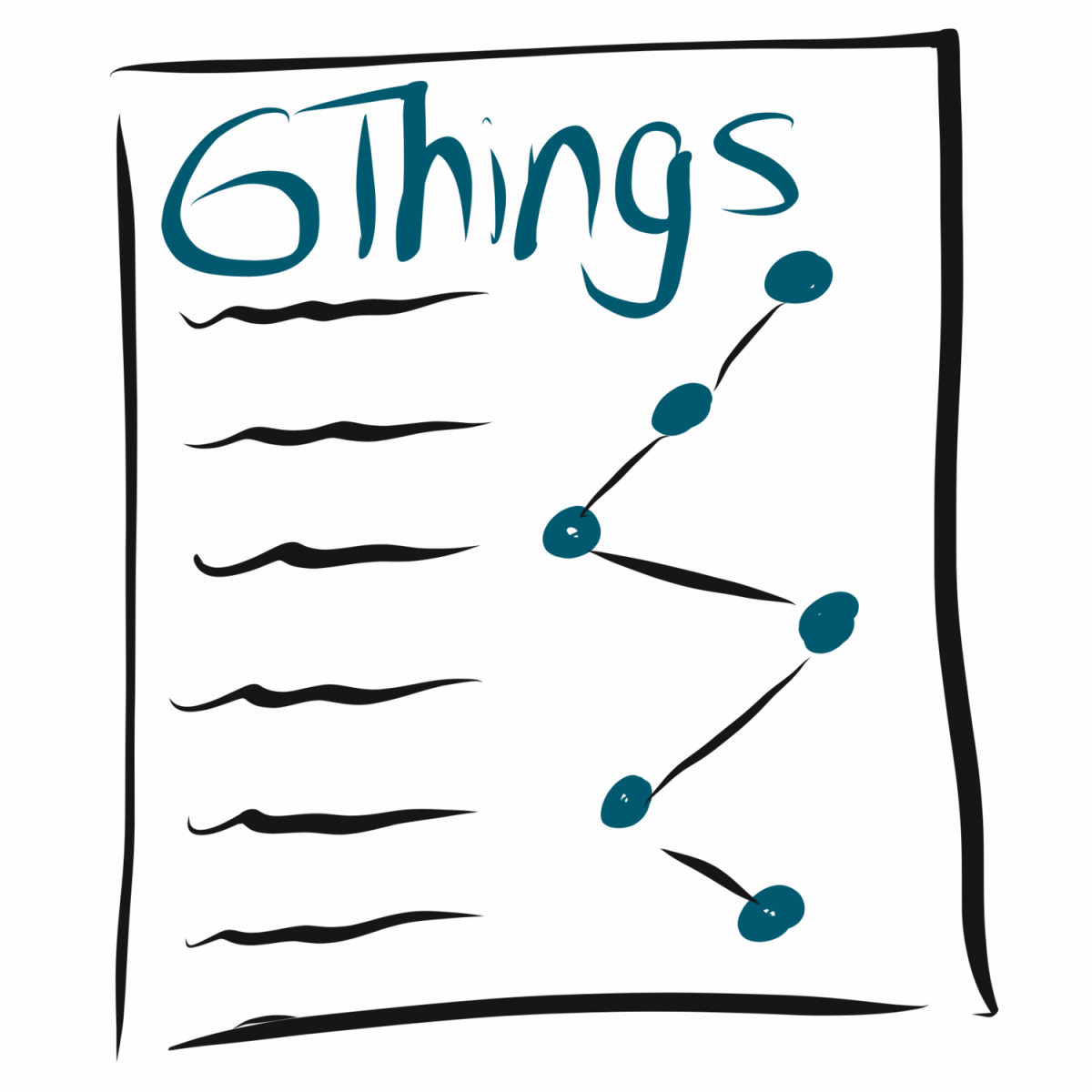 Remember, it is perception not reality. Our teams are rationalising what they see us do through the ladder of inference.

Many leaders do not appreciate the impact that their behaviours have on their team and the outcomes they get, they are unaware of the disconnects between what they say and what they do.

Back to the 2003 NASA report where they found that

‘At the same time that NASA leaders were emphasizing the importance of safety, their personnel cutbacks sent other signals. Streamlining and downsizing, which scarcely go unnoticed by employees, convey a message that efficiency is an important goal’.

Guess what; their teams focused on efficiency and sidelined safety.

A simple way of measuring the scale of the challenge is to use the six things that leaders do;

Our six things tool helps you.

Unsurprisingly the willingness and ability of leaders (us!) to change their behaviours becomes the biggest constraint to any change in culture.

We juggle multiple priorities and are often convinced that our current style and behaviours are our secret sauce, what got us to where we are.

This flow chart maps the steps to assessing whether you can achieve the culture change you are looking for. 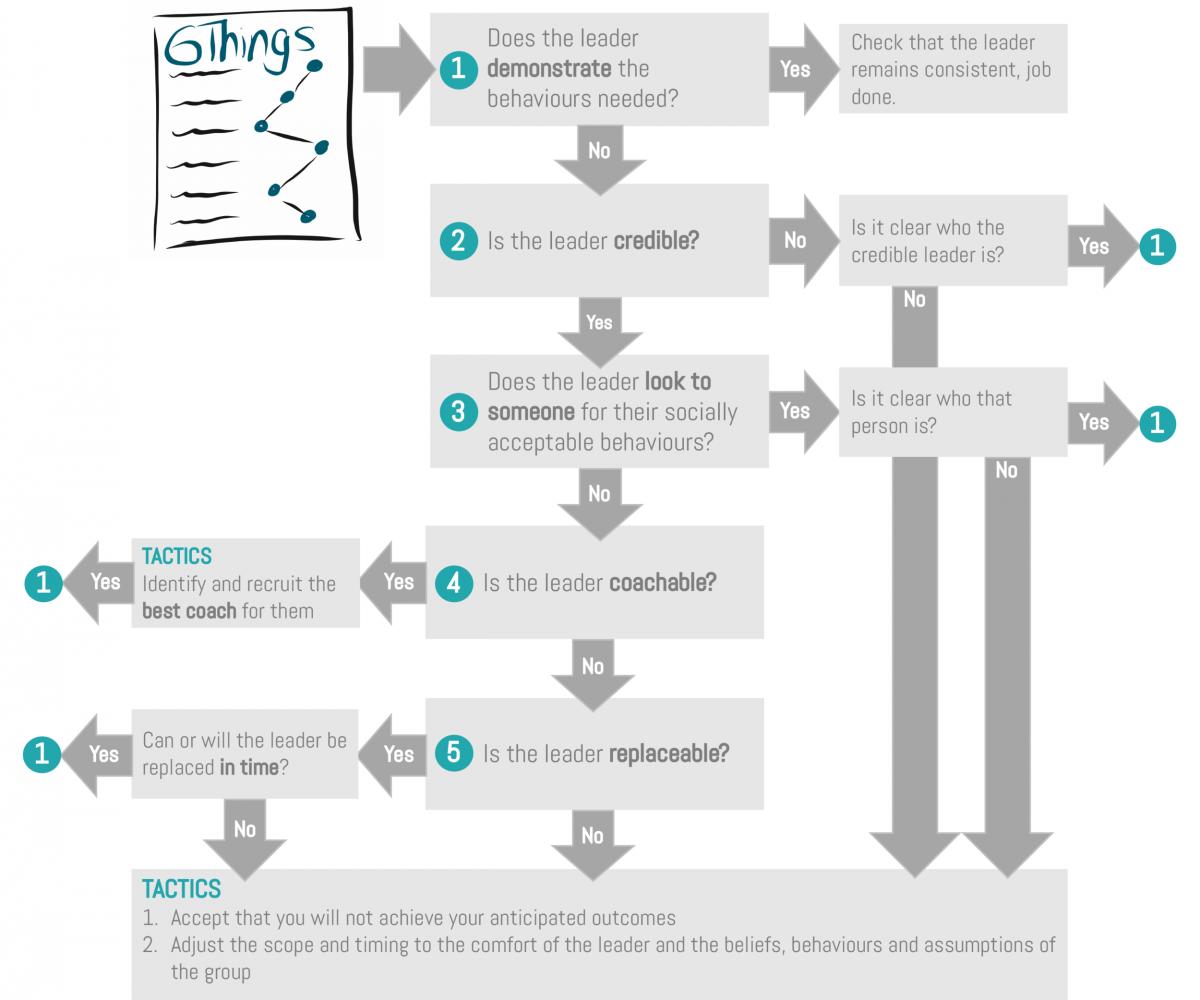 If the change outcomes are really important to you, and the culture change really must happen, then your only tactic is to change the leader, either by building new behaviours or bringing in a new leader.

Building new behaviours takes time and energy especially for us as leaders, we are often protected from the day to day changes that our organisations make. 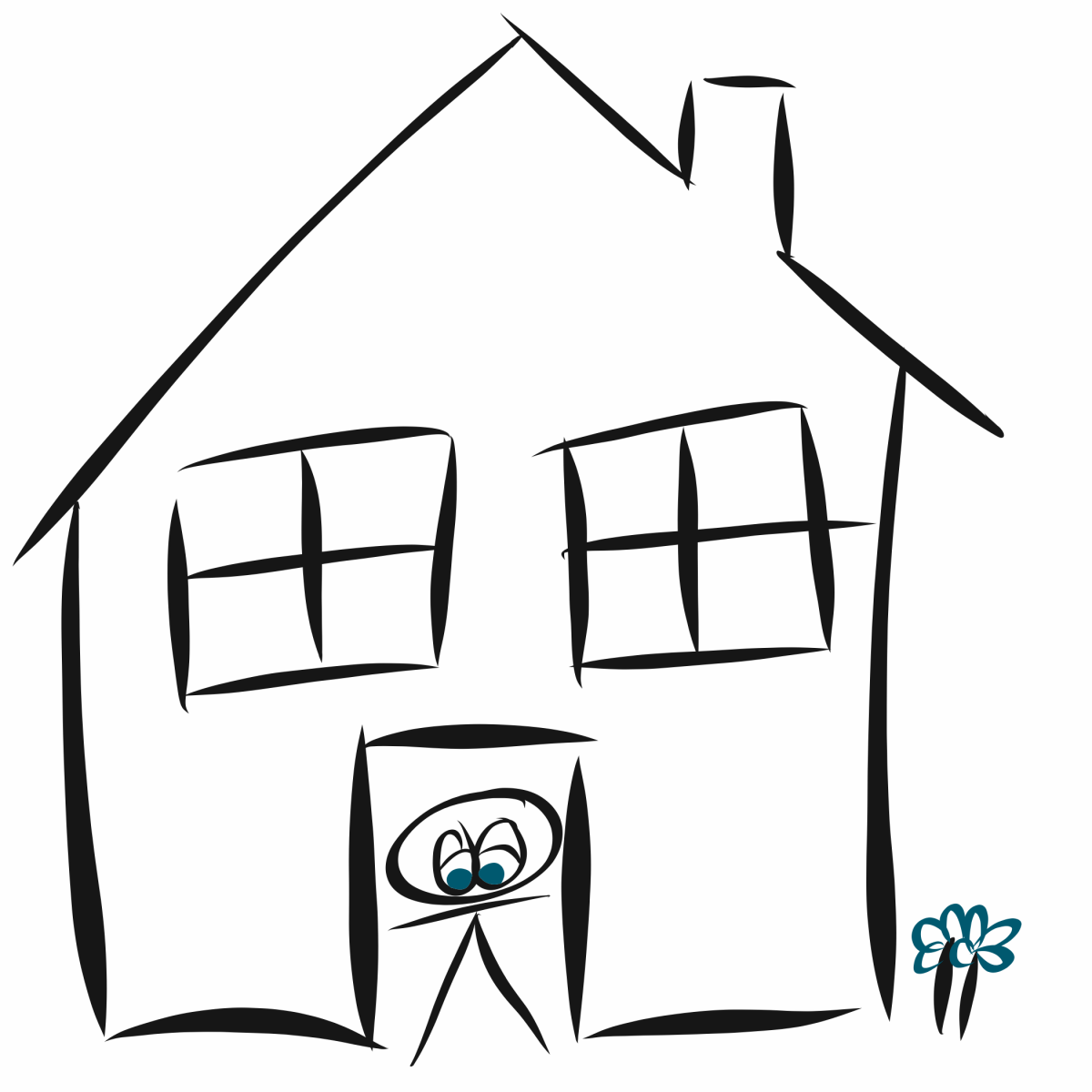 We believe that our behaviours are what have caused our success and that to change them would cause failure. As leaders we are working to survive within our own groups, and please our bosses too.

The first step is to work out how far up the tree do you need to go to create the behaviour change needed.

If our bosses boss is speaking about taking more risk, but continues to behave in a way that is risk adverse, we will continue to be risk adverse.

Once you have identified the right leader to start with this takes 1:1 coaching using a credible coach and an environment where the leader can be open and honest. This may have to be cascaded through each level.

As an agent of change, our role is to work out which leader to start with, to create the right environment and find the right coach.

There are no short cuts, but once an influential leader shifts their behaviour, expect the group to shift and fast! 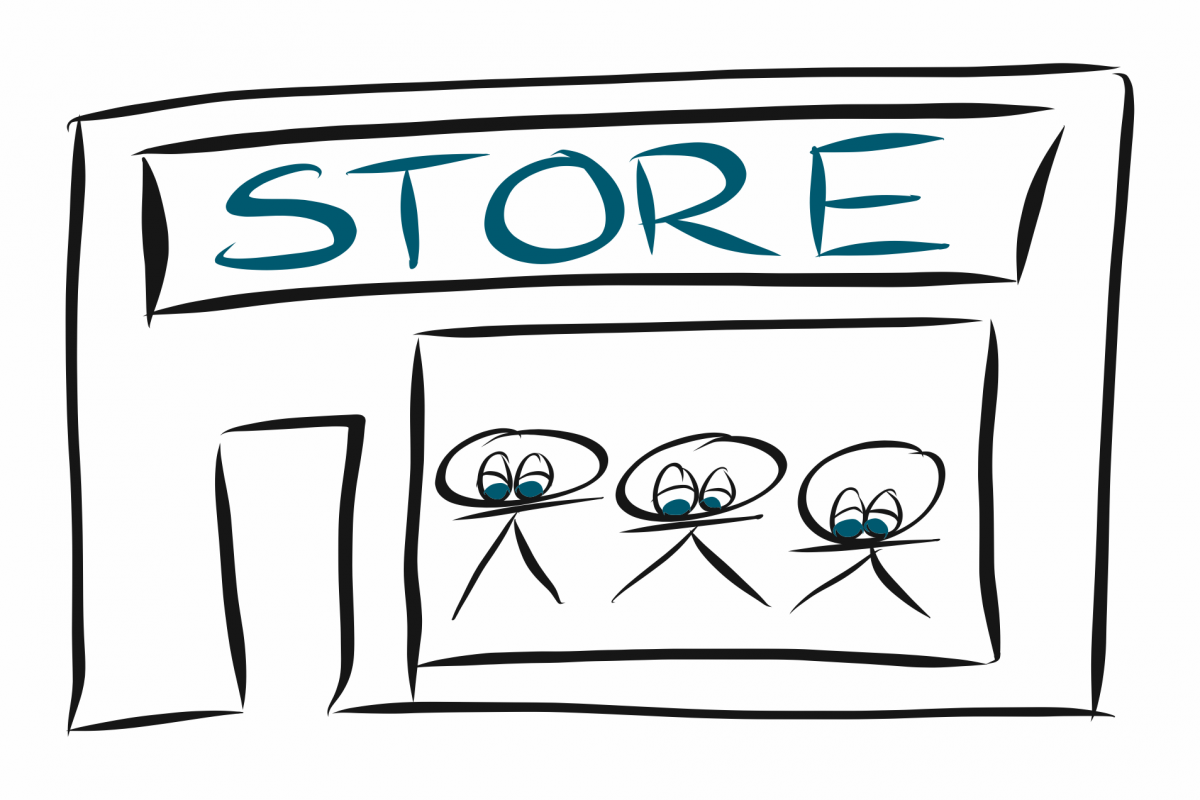 Buying in a new leader comes with its own challenges and pattern that we see played out in the pages of the business pages of the newspapers on a regular basis.

If the organisational culture you are trying to change is strong, there is a good chance that a culturally different leader will be isolated and ignored, quickly losing their credibility and leaving within their first 12-18 months.

Or they will allow themselves to be normalised for their own survival returning to where you started.

Private Equity companies know the importance of leadership and often change the entire top team on the acquisition of a company to fast start the change.

Conservative estimates reckon that you have to change 80% of your leadership population to bring about significant behaviour change.

or Change the Change

Often the most pragmatic outcome is to redesign the change or transformation to fit the current culture, or the pace at which the culture can be changed.

Changing leaders’ behaviours is hard, is there an alternative? 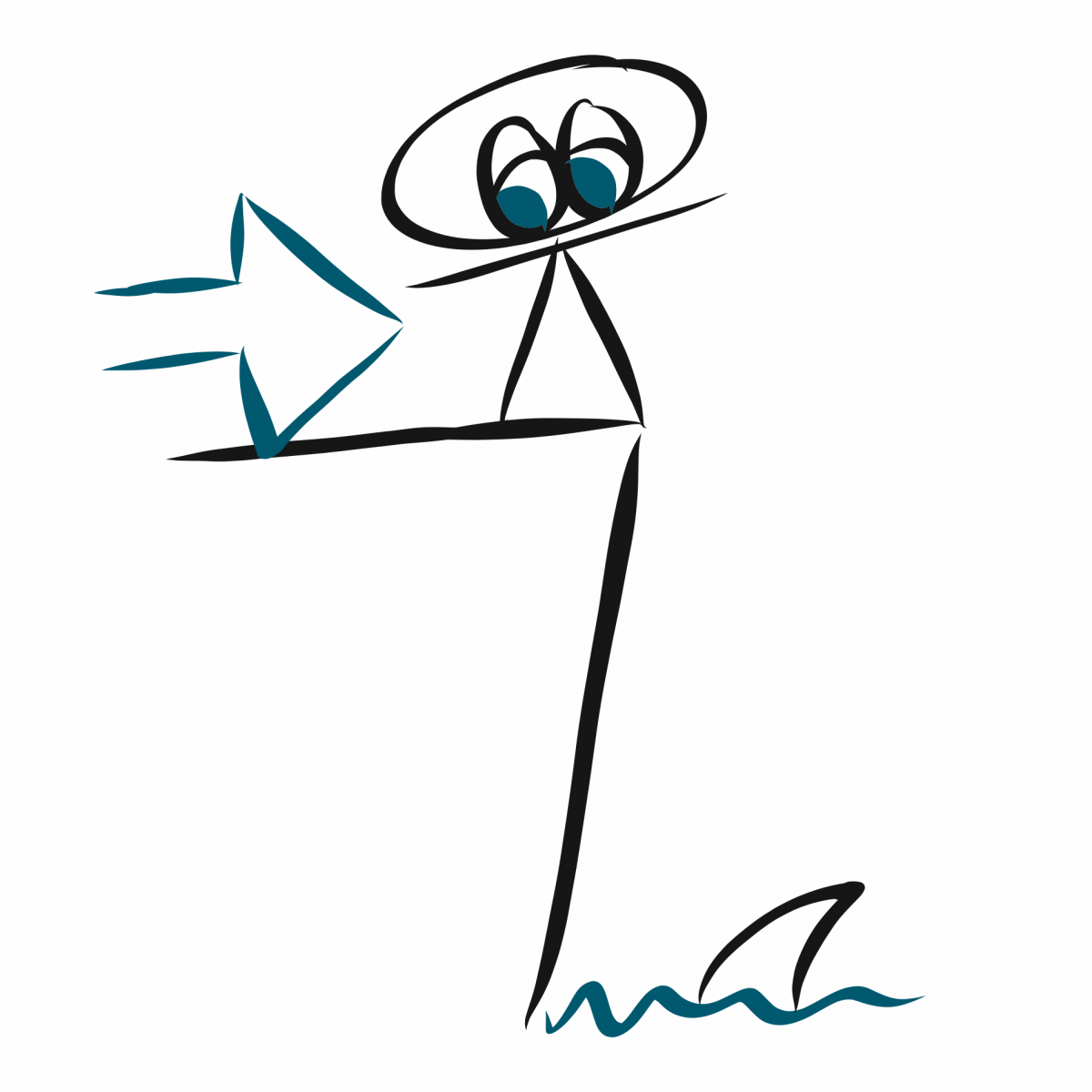 There is just one other thing that changes culture - Crisis.

Crisis is when the group (or their credible leader) realise that their beliefs, behaviours and assumptions can no longer guarantee the success or survival of the group.

The crisis often comes from external factors, or social pressures. Think #MeToo, the removal of Travis Kalanick as the leader of Uber, the company he founded, due to its ‘toxic macho culture’, or the move to reduce plastic, where companies recognise that an inability to stay with the social trends could destroy their credibility.

You cannot manufacture crisis however much you claim it.

What about storytelling? Storytelling is an important part of creating and continuing a culture.

Storytelling is a great tactic, but only works if the stories match what our teams believe we, as leaders, think and do. Leadership comes first, once established storytelling is a great way to amplify the change. Stories flow quickly especially where our behaviour surprises our teams. Bad news travels particularly quickly, especially the failures rather than the successes (see Humans are Predictable). Any disconnects will take our change backward, not forward. The NASA example is one where words and actions did not match.

What about social epidemics, could we create the tipping point in our influencers?

An uprising from the ranks can work but only if we, as leaders, are passive or neutral to the shift in behaviours. If there is any disconnect, or the shift threatens the credible leader’s perception of their success then the tribe will not risk its own safety. It is a risky strategy and you are unlikely to achieve the full benefits that could be available to you.

What about values, mission and vision, don’t these form culture?

Values, a mission or vision are words. We hear them but we will only act on them when we see our leaders change their behaviour to embrace and visibly adopt them, in good times as well as bad. A team I visited recently had a strong value and pride in their charitable giving, this ethos came from the actions of the founding family, the credible leaders and had cascaded throughout. 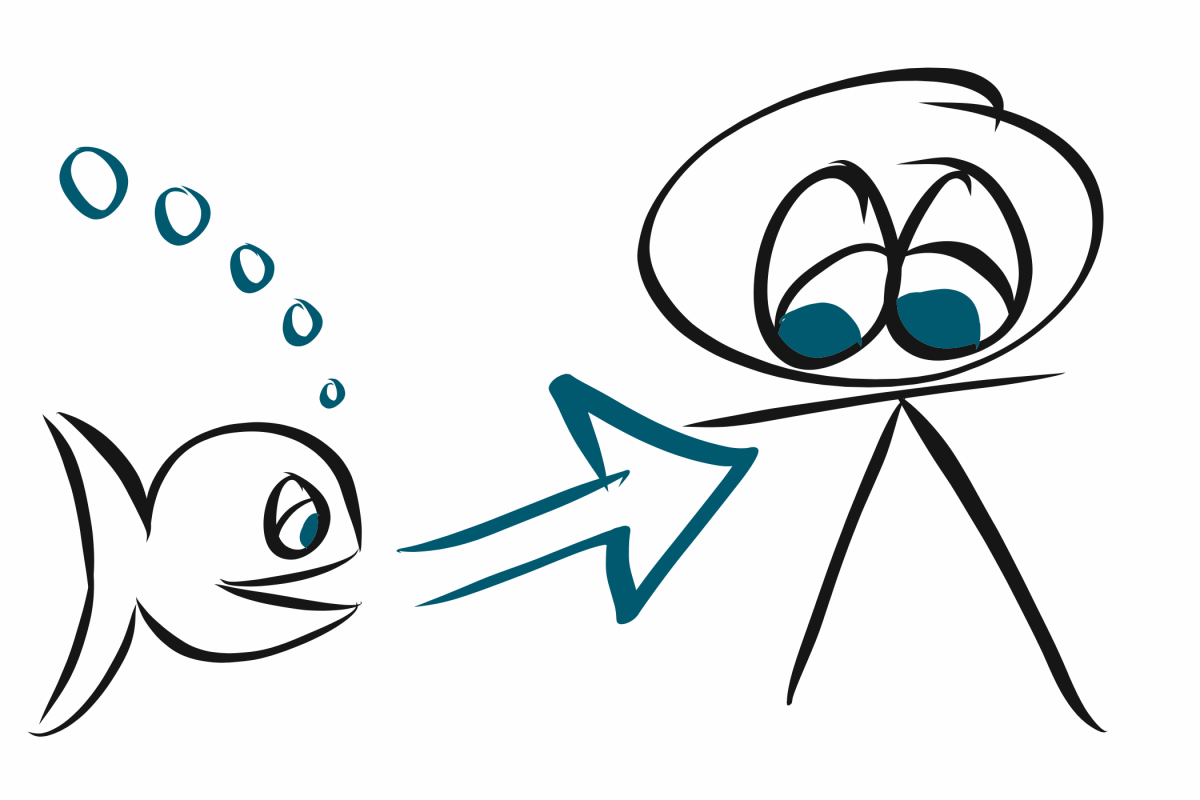 The most significant thing to realise is that culture change is happening daily, all around us and without our help.

As leaders change priorities, direction, get new ideas or a new boss, we and our teams naturally adapt to please them. Often at speed.

The more emotional intelligence that leaders have the more they understand the impact of their behaviour on their teams and the culture they create.

If you have a big culture change; either change the leaders behaviour or change the change.

If you are the leader, have a good look in the mirror at the behaviours you are displaying to your team. You will get the outcomes you deserve.

If you are the agent of change your biggest barrier to success is your ability to have a ‘tough’ conversation with your bosses, watch for an upcoming article on how to navigate these conversations. 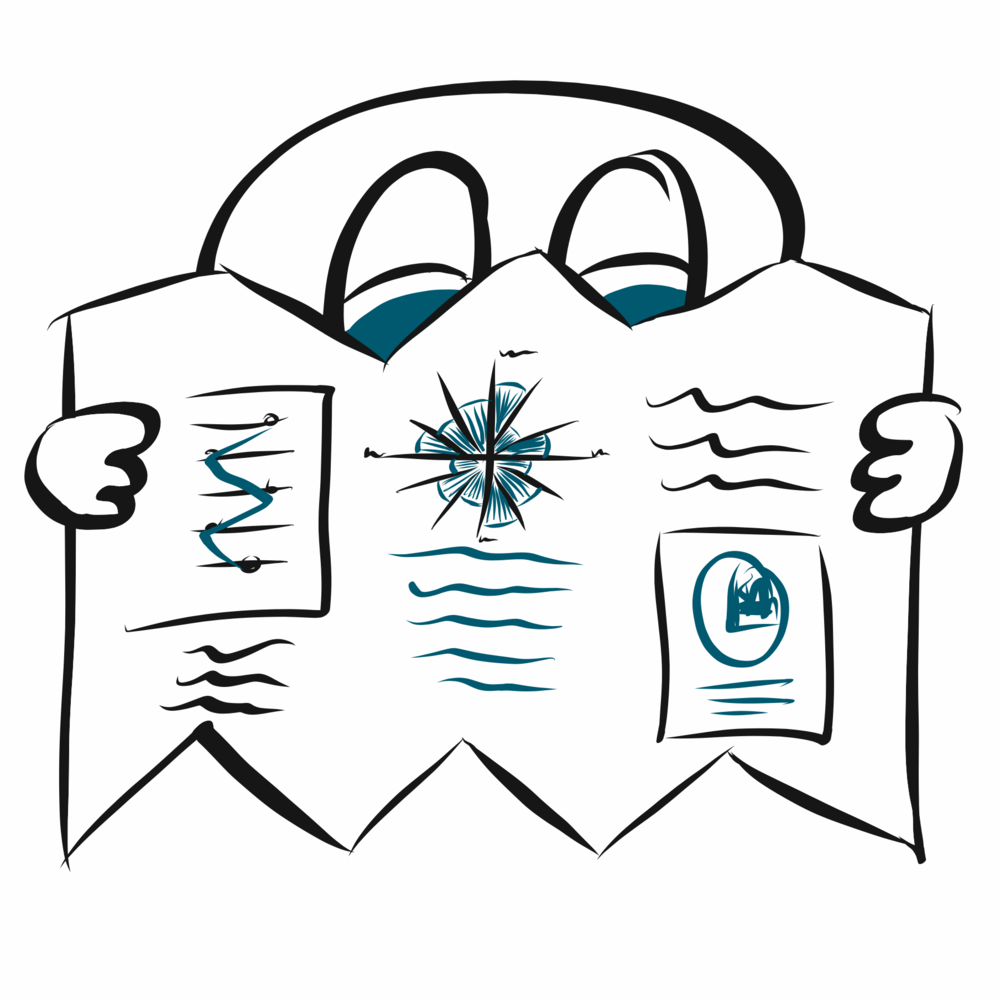 Subcultures form wherever there is a leader who is setting a different set of socially acceptable behaviours, whether geographically, by function or division.

The ability of a leader to operate with a different set of behaviours often reflects the power bases within an organisation, and a reluctance to address these changes.

The work by Hofstede remains the best source of National Culture understanding and assessments that I have found.

The Competing Value Framework remains my go-to assessment of the broader organisational culture. It is not a coincidence that the questions behind the scoring all relate to leaders behaviour and style.

Edwina Pike has spent over two decades successfully designing, leading and implementing complex transformations in a FTSE10 organisation. Her passions for understanding why humans change, how to deliver value through behaviour change and the impact of leadership, have led to insights which are useful to us all. Now sought after as a leadership coach and transformation adviser Edwina can be found at her advisory business Pike Squared or writing for her coaching business The Change Wizard.