Is Royal Marines servant leadership, applicable for the modern world? by Antony Thompson

A study conducted by Gallup in 2011 revealed that the cost of employee disengagement was estimated at $350 billion in the US. In 2017 this study was conducted again. The results are shocking. It showed a 50% increase, the total cost of employee disengagement on productivity at anywhere between 450 and $550 billion, this excludes the potential of missed opportunity costs. As a business, you could be missing out on cost-saving initiatives and money-generating ideas.

As a young lad growing up, I was unaware of what leadership was, or how it could be defined. All I witnessed were selfish acts (although normalised) which put the doer at the forefront of the carried out action. Sometimes to the detriment of others and rarely for the benefit.

It was only when I joined the Royal Marines, was I exposed to the power of what a real leader was, and, although I couldn’t have defined it back then, servant leadership from those in command. Training was difficult, without question there was a lot of hardship and living in austere conditions, but in reality, the training team were there with us the whole of the journey (32 weeks to be precise). One of the other things which is different about the Royal Marines is, at Commando Training Centre Royal Marines (CTCRM) the Officers train and live alongside the recruits. I frequently bore witness to Officers getting thrashed and I remember my self-thinking, “wow that’s pretty hardcore and looks a lot worse than what I have had to do, I do not fancy being those guys”. It was what probably inspired me to become one later in my career. The idea behind Officers training alongside recruits is exactly for that reason, the ethos being the Marine officer will never ask something of one of his men that he himself would not be able to complete. All the officers’ commando tests have less time to complete than that of a recruit. There are also field exercises which put the Officer in training, in charge of a group of recruits. This does two things to the mindset of an Officer, one it gives great confidence in the decision-making process, and two, it encourages the idea of empathy, a fundamental of servant leadership. We learn one thing over most in RM Officer training, you are the pastoral carer of the men and women you lead.

What we regularly see in the corporate environment is the opposite, we see managers and so-called leaders giving their teams tasks they wouldn’t ever do or ‘muck in’ with. We sometimes see those in a senior role, show off the perks of their position. This could be two things, either they believe it acts as an incentive for their staff to perform, or it makes them feel better about themselves, the real message the staff receive is, ‘your future is not at the forefront of my priorities’. Like me, very few have been exposed to true servant based leadership, some have been to on or seen a talk on it, but will likely undervalue its simple application and therefore will not see it as a benefit to their organisation. Yet unknowingly, the small investment of putting your people first will often pay the biggest return. Without it, you have an organisation of disengaged or actively disengaged people, costing you turnover and potentially your reputation.

It is often too easy to put the financial conversations, project meetings and output focused deliverables at the forefront of every senior-level meeting, leaving people and performance last on the agenda. Where all too often, time has overrun, or the meeting group are far too exhausted after thrashing out the ‘important’ content first, leaving little energy to give to the thing that matters most in their business. Their people.

In the Marines, the officers know, without their people, they couldn’t achieve a single objective. You can have the most technologically advanced kit in the world, but without the people, little works.

The Business Transformation Network has posted this article in partnership with Vanguard Solutions.

Anthony Thompson is Co-Founder of VGS. He joined the Royal Marines at age 19. Through tenacity and endurance, he obtained the green beret and was almost immediately sent to the front line where, trauma, mental fortitude and physical robustness were all tested to the extreme. A 10-year span saw Antony travel a good percentage of the globe and in theatre on three occasions.

Having wanted to excel and progress within the Royal Marines, Antony opted for Officer training, where nearing the end, he suffered a life-altering injury. This saw Antony conduct a two-year rehabilitation programme, only to be medically discharged from the military a year later. With desire shattered, it was time to return to the ‘real’ world and step up to the frontline once again.

Experiencing several blows upon exit, Antony eventually took up the position of a management consultant within London, advising on significant multi-billion pound infrastructure programmes. In the shadows a greater project was being built, a business concept that if born into fruition would revolutionise how business is conducted. He met, now business partner Ben Williams and together set the wheels in motion for what is set to positively disrupt the business world. He is now the proud co-founder of Vanguard Global Solutions – a company dedicated to positively impacting the world. 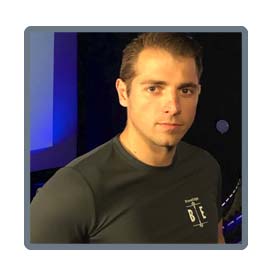