Rosie has a new job and it’s in TECH! By Jackson David

In this month’s article, I want to focus on a very prevalent topic in today’s TECH companies and the Technology pillars of business. Diversity. One of the leading topics in that conversation right now is around women in technology, or rather, the lack of it. I have particular empathy around this issue because it hits home. Maybe that is from my childhood where tolerance was expected, or coming from a large family with six sisters and two brothers, or perhaps it was due to the diversity of age, race, and gender, within our family at large.

The lead photo for this article I felt, was spot on for this topic. Rosie (the Riveter) was a creation of a marketer during WWII, as a call to arms so to speak, for women to join the war effort. After WWII, women entered the workforce more often and with more education than ever before. Now, in 2017, we are in a new “war,” a competition war one would say, to not only keep up with technology but for the US to lead it. We will do that by having more diversity in TECH.

The fire of this topic has grown from its initial spark which most tie back to the Google employee, a male, who stated in a memo that women are less effective in technology due to their psychological challenges. Google fired that employee soon after that memo and released a statement by their Head of Diversity, Danielle Brown.

Sexism is real in the workplace, and TECH companies are not excluded from it. Most would agree, the lack of gender diversity in TECH is only matched or higher, than that of in Financial Services. Both will need to take a deep dive internally to make ground on this issue.

Speaking of family, statistics show that the more diverse a family is by gender and race, the better equipped they are to survive hardship, be successful, and go on to support each other in older age. They are also more likely to teach their children tolerance. The same context is looked at in the workplace. Why do some teams outperform others, in a company that hires mostly from the top 15 business schools? Diversity. There are also statistics around women in leadership roles, especially at the board level. Those state that diversity increases innovation, creative thinking, faster problem solving, and ultimately, a balance which in turn creates long-term growth. That sounds like a success for all to me.

I recently had a conversation with a colleague around trail-blazers, such as Marissa Mayer. One may argue that her move to Yahoo! has lacked luster, but has it? Her move to Yahoo! is everything but lackluster. It has continued to pave the way for women in technology; such as for some of the top developers at other companies like Apple. (article).

It also led me to think about the new innovative women in TECH such as the founder of Girls Who Code, Reshma Saujani. She is a double-tick for diversity and is paving a pathway for young girls to pursue interest and education in software development. I commend her and her team for this work.

Some other very noteworthy #WomenInTech are Rhonda Vetere, the Chief Technology Officer for The Estee Lauder Companies and a whom made 2017’s 100 Corporate Women Leaders in STEM by STEMconnector. I have the privilege to work with Rhonda, and she is not only innovative but kind and resourceful. She runs alongside the likes of Myrna Soto, Comcast Communications’ Chief Information Security Officer, and with Sheila Jordan, the current Chief Information Officer for Symantec.

Alternatively, take Tiffany Pham who started Mogul INC. She is a remarkable young woman who three years ago started a technology platform that enables women worldwide to connect, share information, and access knowledge from each other. Her site now reached over 18 million across over 190 countries. A simple idea that has the potential to changes women’s lives by inspiring them to continue their pursuits, and not alone.

Speaking of “not alone,” I went to my network to ask a few women in TECH what they thought about the future of women in technology and what advice they may give.

One of my first conversations was with Lindsay Conwell from DynamicAction headquartered out of Redwood City, CA. Lindsay is the VP of Solution Engineering, and the Accenture Alliance lead. I asked her; “How do you or your team, impact diversity in Technology in your business today? Are there goals around this?”

Lindsay said she is a massive advocate for mentorship, up, down and across the organization. What that means to her it to “…simply get involved with other women in my field and outside of it, including newcomers and existing teams. It’s important to understand how younger women believe they need to carve out their space in technology. I share my own stories, and I think that’s how others can learn and use those to succeed in their way.” She went on to say; “I am one of two women on our leadership team of eight, which is a great start for changing the gender gap at that level. We believe as a team and company in being our authentic selves, regardless of gender, race, and age or otherwise. We have built this into our moto within our marketing events and in connection to causes with needs in the industry or community.”

Lindsay went on to tell me that they have internal goals around diversity, tied to their Culture Club (yes a 1980’s rock band tie-in). This is an internal club which is focused on diversity in roles, departments, both remote and in-office team members and across countries. “The Culture Club intends is to bring back culture related topics to the leadership team, such as a pulse on our goals to ensure we have a diverse representation in our company.”

I also asked Lindsay, “What advice would you give young women who are either pursuing a STEM degree, looking to get into a technology company, or thinking about starting their very own technology or tech-related company?”

Lindsay replied by saying; “Master what it is that you are good at, and work to find mentors and people to work with who elevate you by their journey and capabilities. I would recommend capitalizing on diverse relationships and be tenacious. Go after what you want to do and where you want to go, but while doing it, be gracious, kind, and pay it forward.”

I also spoke with Nataliya Seryakova, a technology up-and-comer developer from Liquidsky, a cloud gaming company featuring an open platform based here in New York. Nataliya is an excellent example of women making a pivot from a more traditional professional route and education to technology. Nataliya’s degree is in Psychology, and she started her career in research and marketing. But, with the help of continued education by Flatiron School along with her commitment to change, Nataliya learned how to code and now sits in a high-growth technology career path.

She tells me that the development team at Liquidsky is 20% women. That’s a significant number. While the percentage is higher than average, they are looking to increase it even more. She went on to say; “We value developers with diverse career backgrounds outside of coding. Our engineers have skill sets like marketing, sales, graphic design, and economics. A wide range of perspectives encourage innovation and make our company stronger.” I agree!

Nataliya also notes that until a few years ago, she had no idea that programming “could be so fun, addicting, and empowering.”

She and I agreed on another important matter. “Educating women about technology and exposing them to non-traditional developer role models would help to mitigate the decline of women programmers that has been occurring since 1990.” Lucky for all of us, more and more TECH companies and start-ups, are in agreement too.

I then asked her what advice she would give to other women entering in the field of computer sciences; “When you do something challenging and worthwhile, you’re going to feel uncomfortable and like a fraud at first. That’s normal. You need to give yourself a chance to succeed and prove to yourself that you can do it.”

Spot-on Nataliya. I cannot think of more accurate words from a present-day Rosie the Riveter than “You Can Do It.”

For more on the conversation of Women in TECH, check out this Ted Talk and this article from Workforce.com

Jackson David is currently the Global Head of Talent Acquisition, Sourcing, and Employer Brand at Etsy. He is also the founder of JD Talent Search + Strategies, a consulting consortium that works with start-ups and enterprise clients on executive search strategies, talent mapping, employer branding, and long-term talent strategies.

With now 20 years of both business and talent leadership experience, Jackson focusses a lot of his spare time on giving back to the community and supporting networking and product ideas to the Start-Up community. He is excited by creating pathways and mechanisms for people to reach success and is equally passionate about travel, family, and new technologies. 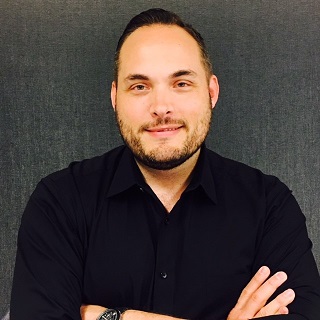