“Insanity: doing the same thing over and over again and expecting different results.” –Albert Einstein

This is the second post in a series of four that focuses on the adoption of Procurement technologies. It will highlight some important aspects of the psychology of change because:

The problem with changes…

“The only thing that is constant is change” — Heraclitus

What was true in Ancient Greece is even truer today. Especially when looking at changes induced by or linked to technology.

Despite the facts that:

many organizations and change leaders fall into the same traps.

So, to develop the right approach and methodology, it is important to review what these pitfalls are.

The psychology of change management…

“Most change programs fail, but the odds of success can be greatly improved by taking into account […] counterintuitive insights about how employees interpret their environment and choose to act.” Source: The irrational side of change management, Mc Kinsey Quarterly, 2009

People are “Predictably Irrational” (to reuse the title of Dan Ariely’s bestseller). So, understanding how people make decisions is critical to take the right approach when presenting and selling a change.

Deciding (to change) is often not a logical or rational assessment of various options. Many factors come into play and influence us.

Also, organizations are living entities, and are also subject to forces that hinder change. These forces, too, must be acknowledged and counter-balanced with the right actions.

People are far from being rational…

At individual level change is difficult.

” Brain science has found that human beings are anything but reasonable. […] As managers, our misunderstanding about how the mind works causes most of what we do to not only be ineffective, but counterproductive. When it comes to motivation, our approach is based on the view of classical economic theory that people are rational beings trying to maximize their economic return. This leads us to use the promise of rewards to motivate the behavior we need. But in direct defiance of the theory, people don’t respond reasonably or objectively to the rewards.” Source: A Mind for Selling: Brain Science Is Turning Management On Its Head, Charles Jacobs, June 2009

Changing means moving from A to B. As illustrated by the quote above, the traditional way to build a change management program fails often. Various biases impact the perception that people have of A and B. Typically,

There is an imbalance that jeopardizes the success of a change initiative.

People are bad at being aware of what they currently do.

Part of the assessment to decide if a change is worth it or not requires the analysis of the current state (A). Also, Procurement technologies impact the way people work. So, the perception of how good people think that are at doing their job has an influence on their decision to change.

“The fact is that human beings consistently think they are better than they are — a phenomenon referred to in psychology as a self-serving bias” Source: The irrational side of change management, The McKinsey Quarterly, April 2009

It is, for example, why many people say “why would I need to change what I do when I am already achieving my targets.” They link their results solely to their actions, forget their own shortcomings, and elude how they got the results (be it with the help of a process, a tool, or other people).

People are bad at valuing a change.

Another important aspect of the decisions to change is about the value that people attribute to:

There are two primary sources of influence at play that also hinder the rationality of that assessment:

These two factors explain why just presenting a list of benefits to people who will have to change what they do is not enough to convince them and get them to embrace the change.

A typical mistake in Procurement is to think that the new technology is “so simple to use that people will adopt it immediately.” Many organizations do that mistake. It is true that easy-to-use technology is important as it will facilitate adoption:

But, using only that user-friendliness as sole motivator or sole justification for people to change will not work.

Another important aspect that explains in part the difficult to be rational and logical in valuing a change has to do with time. It is called time discountingand it represents “the relative valuation placed on a good at an earlier date compared with its valuation at a later date.”

It means, in short, that any benefit that people would get in x weeks or x months is undervalued vs. a similar reward that would come immediately or very soon.

time discounting has a sizable effect.

All the biases above apply to the “target” side, the people who will go through the change. The thing is that the same exists on the other side.

It is because they are already convinced by it. They make the change and the future state (post-project) theirs. It means that the endowment effect is at play for them too. They overvalue the object of the change.

Therefore, we have a unique situation where:

The result is a mismatch in valuation by a factor of 9, the 9X effect. 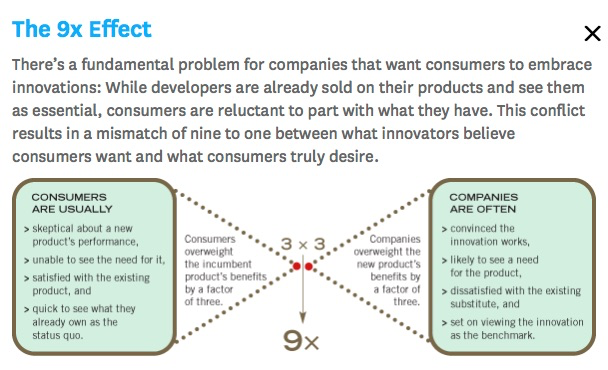 Organizations are resilient to change…

In the way they respond to change, organizations are like big jelly:

”The “theory” is that if you throw yourself and your team members, 100% mentally and physically, at the organization, in an attempt to change it, at best the organization will give a little shiver, momentarily, like a giant jelly, and then immediately return to its pre-existing shape and carry on, with business as usual, as though nothing has happened. Clearly this way is energy, effort and time consuming, with little or no discernible result.” Source: The Big Jelly Theory, Paul Finnerty, December 2013

Despite all efforts from change leaders, organizations are resilient to change, and the usual outcome is a return, after a while, to the previous state. A second image is valuable to understand why.

Organizations, especially large ones, can also be compared to oil tankers. Because of their large size and weight, oil tankers are extremely tough to pilot. A change of direction given by the captain on the wheel does not immediately alter the route of the ship. It takes a long time to see the ship turn.

The same is valid for organizations. Change, if it happens at all, takes a lot of time because of the inertia (size, culture of complacency…) of the organization. So, stirring an organization towards a new direction is like piloting a tanker: between the moment you impulse a change and the moment the organization actually changes, it lasts a long time.

Maybe because of all of the above, change leaders and organizations repeat, projects after projects, the same mistakes. The next post will review the most common ones.

You can view part 1 of the series here. 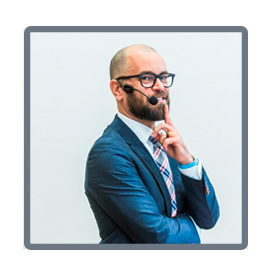 Cyber Security can be a Pillar of any Corporate Post-Pandemic Agenda
Read post
Changing Jobs in a Global Pandemic: The New First 100 Days of the CISO by Jean-Christophe Gaillard
Read post
The UK Government’s Guide to Setting up for Project Delivery Success – the Project Routemap