Praise and the 'impostor'​-Why you're doing reviews wrong! by Terri Simpkin

There’s a good deal of commentary and discussion about the impostor phenomenon appearing in social media and the popular press recently. However, there’s an absence of appropriate scrutiny of how workplace structures and leadership behaviours impact and exacerbate the experience of intellectual fraudulence.

My work aims to change the perception that the impostor phenomenon be considered an individual experience, dealt with in isolation from the workplace and structures we all encounter as part of our usual work activity.

As the first in a series introduced last week, this piece examines the role of the performance review.

Performance reviews, appraisals, feedback sessions – whatever you call them, they’ve been maligned as a necessary evil for decades. They can be uncomfortable, time-consuming and for the most part, not much comes of them. Often poorly structured and managed by people who think they’ve got better things to do with their time, the performance review is one of the workplace structures that comes up time and time again as adding to the stress and discomfort that the experience of being an ‘impostor’ can bring for a number of reasons.

People experiencing ‘impostorism’ are masters at discounting or dismissing praise.

“My boss gives me glowing reports in my reviews. I know that he’s got no clue what I do or whether it’s good enough. So, I just can’t take that praise seriously. What if it’s all lies?”

People experiencing ‘impostorism’ (an often illogical fear of being found out as a fraud in the face of evidence to the contrary) are masters at discounting or dismissing praise. It’s one of the key characteristics of the phenomenon. Externalising good feedback and absorbing all the bad is what ‘impostors’ do. The good stuff belongs to serendipity or other people. As a manager, you’ve probably heard people suggesting that the praise belongs to their team or being in the right place at the right time or “oh, well, you know, just doing my job, anyone could have done that, it’s nothing special.” I could go on.

As a manager, you may make some fluffy response to suggest that, no they should be proud of their achievements and moved on to something else. What you may not have done is provide objective evidence, such as statistics, written testimonials or other concrete material to prove the feedback as true. Sometimes there is none to give. And this allows the 'impostor' the opportunity to discount your feedback and dismiss the praise you've tried hard to pass on.

... you must be seen as having a clear understanding of the role as well as the demands and objectives of their job. Without that, all feedback is likely to be dismissed ...

Most importantly, as a manager you must be seen as having a clear understanding of the role as well as the demands and objectives of the person’s job. Without that, all feedback is likely to be dismissed and you’ll lose the credibility to make a case as to why your feedback is true, thus leaving the ‘impostor’ to continue to believe that they’re not good enough.

There’s a tendency for managers to gloss over dismissals of praise as being modesty or humility in their colleague. In truth, the ‘impostor’ will be cringing and wanting to fall into a hole in the floor. You may see it in their body language. They'll cross their arms, turn away or physically 'wave away' your words of praise.

One respondent told me that her ‘toes were curling at the thought’ of receiving praise or good feedback. Almost all of the interviewees suggested that they’d prefer to hear where they went wrong than receive good feedback. They told me how they actively deflected it.

As a manager or leader what should you do?

Overall, a good leader or manager will take performance reviews/appraisals seriously despite the bad press and perceived (imagined?) inconvenience they bring. So too, performance feedback should not be a once yearly occurrence or be saved up for a formal review process. However, even when giving ad hoc praise, deflection by an ‘impostor’ team member should be challenged; amiably call it out and be ready with evidence.

Next week, pay and rewards. How the impostor phenomenon is contributing to the gender pay gap, colleague rivalry and disengagement.

Braver Stronger Smarter is an evidence-based programme designed to help individuals, leaders and human resources professionals address the impacts of the impostor phenomenon at work.

Workshops, consulting and coaching to help people be their very best selves. Always.

Dr Terri Simpkin is a recognised academic, researcher, consultant and expert in leadership and management in the second machine age. A successful business leader, she has worked internationally with governments, industry associations, large and small business and is an accomplished academic manager. She has managed university departments with a global remit and designed world-leading, cutting-edge Master’s programmes and corporate leadership development. She sits on global advisory panels for the Data Centre sector and is a sought-after public speaker. As a researcher, she is actively involved in global studies into the role of the impostor phenomenon as a barrier to career advancement, particularly for women.

Her research provides the Copyright Mischief Business Engineering, 2018 foundation for her consulting work through Mischief Business Engineering (Uk & Aust) and supports a full suite of programmes called Braver Stronger Smarter. Her academic work continues as the Higher and Further Education Principal with CNet Training. Terri is a Churchill Fellow, a Chartered member of the CIPD, a Trustee of the Baker Dearing Trust, Fellow of the Higher Education Academy and, in her spare time, a devoted Duran Duran fan. 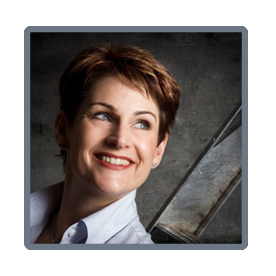