Lee Iaccoca – The 10C's of Leadership by Roderic Yapp

One of the things I am enjoying so much about Ray Dalio’s book Principles is that he thinks long-term.

One of the early lessons he learnt in investing was that if he only relied on his experience, his decision-making and the context on which it was based would be severely limited. He fixed this by broadening his understanding to events beyond his lifetime. He studied past economic crashes such as the one in 1929.

Then, when the crash happened, what was the Government’s reaction? What impact did it have?

We like to think that we are living in a completely different time and I think to some extent we are. But human behaviour doesn’t change that quickly. Dalio learnt that if you study the past, it gives you an insight into the future. In 2008, when the market crashed – his portfolio grew by 14%. Not bad when you consider that the average loss was around 30%.

A number of my workshops start by getting people to reflect on great leaders in the public eye. When I ask for some business examples, typically the same names crop up; Elon Musk, Jeff Bezos and Richard Branson come up time and time again. I think that this is largely due to the fact that these people are in the public eye, they’re current so spring to mind quickly.

Rarely, do people mention Lee Iacocca who I believe to be one of the greatest CEOs of all time. I think part of the reason people haven’t heard about him is that he is that he’s 93 – he’s a business hero for a different generation.

Lee Iacocca rose through the ranks of Ford leading the development of some of the most successful cars ever produced. He’s often regarded as the father of the Ford Mustang, a favourite with anyone who loves cars. He continued to progress his career at Ford eventually becoming CEO but in 1978, he fell out with Henry Ford II and was fired. This was despite the company posting a profit of $2bn that year.

He joined Chrysler soon after when the company was in dire straits. In 1979 he approached the US Congress to request a loan guarantee to keep the company afloat and started to execute some of the ideas he had when he was at Ford. The Dodge Caravan and the Plymouth Voyager were the result; the first mini-vans, loved by families for their practicality. Henry Ford II had wanted nothing to do with a car that is still highly popular today.

His autobiography details the story of his rise at Ford followed by the epic turnaround of Chrysler. It is the best story of a business transformation that I have come across. Iacocca found the company in a mess and about to go bust. His turnaround kept the company afloat, saving many jobs. They even returned the money lent to them by the US Government, with interest. 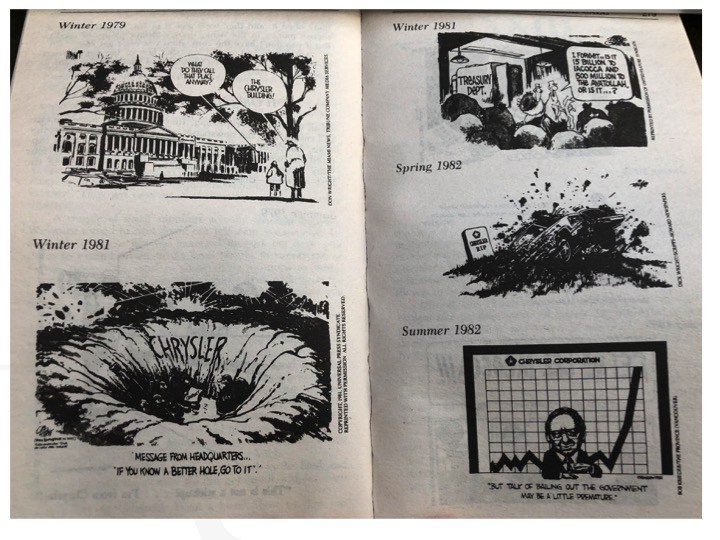 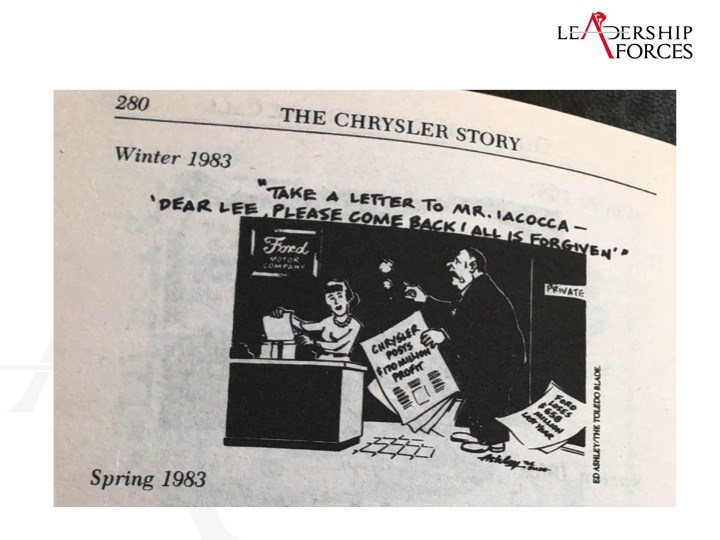 Iacocca later went on to write ‘Where have all the leaders gone?’

Its key themes are summarised below in the principles below.

Leaders are curious by their very nature. They know that the world is more complex than they can comprehend but they work hard to understand it. They read voraciously looking to build their knowledge and their internal context so that it informs their decision-making, e.g. Ray Dalio!

They also seek to immerse themselves amongst people that don’t think like them. This is the true value of diversity. If people see the world differently and are comfortable sharing their views, you benefit from another perception which you can use to inform your actions. Leaders have to get out of their comfort zone and explore new ideas. They must be prepared to be challenged. If they don’t, they run the risk of living in ‘echo chambers of thinking’ where people just agree with them. This is dangerous territory as it creates blindspots. Iacocca believes that the inability to listen is a form of arrogance, either you think you know it all or you don’t care.

Leaders have to be willing to try something different. They need to be able to take calculated risks. This is not about being reckless. It is about trying things and learning from failure. Perversely, it is risky to play it safe all the time because you don’t make step-change improvements and create anything valuable unless you are willing to take a risk. No one remembers Virgin Cola, it was a spectacular failure but anyone that has ever achieved anything, did so by taking risks. You just have to make sure you manage your risks so that losses don’t kill you and take you out of the game.

Leaders communicate well. They tell people about the vision for the future making sure that they over-communicate it so that people really get the message. It’s not good enough to tell your spouse that you love them on their wedding day and leave it at that, assuming that they know and you’ll let them know if anything changes. When leading a company or transforming one, you have to constantly communicate what you are doing and why. Failure to do so means that people will not follow you.

This is about your moral fibre. David Brooks’ book on Character could just have easily been a book on leadership. I believe that most people know the difference between right and wrong. The lessons we learn on the playground as explained in Jon Huntsman’s book are valid throughout our lives. We know the path to follow but that doesn’t mean we always follow it. I think that leaders understand this issue. They know that every decision they make has a moral and ethical component to it. They have a strong sense of what is right and in the best interests of the greater good and they’re willing to follow the right path. As Lincoln said, ‘If you want to test a man’s character, give him power’.

This relates to character but I think what Iacocca is talking about here is ‘guts’. It’s not about swagger or tough talk. This is about doing the right thing even though you know it might land you in hot water. I’ve recently been learning about the ancient Greek philosophy of stoicism. The stoics regard Seneca as a great example of a stoic, someone who demonstrated enormous moral courage. Seneca asked questions and challenged people’s thinking. It led to his trial and subsequent death. Courage is the act of sticking to your principles whatever the consequences.

Leaders have to have passion. They have to have a fire in their belly, a desire to improve the status quo and leave the world in a better place than when they found it. This is what inspires us and makes us want to follow them.

I think this also relates to character but Iacocca defined it as the ability to build trust and inspire confidence. Are your words echoed in your actions? If they don’t, you run the risk of undermining yourself. Don’t make promises that you can’t keep.

You have to know what you are doing. You have to be competent at your role as a ‘doer’ and as a leader. You also need to have the humility to realise that you don’t know everything so surround yourself with people that see the world differently and have different skills and experience.

I don’t think there is anything to expand on here!

Iacocca believed that the most important C, came last. Crisis – you have to be capable of leading people through a situation when the chips are down and the stakes are high. Churchill, our greatest Briton, led the UK through the second world war. He is regarded as one of the finest leaders of all time.

Leadership is easy when things are going well. But when the pressure is in and lives and jobs are on the line, the real leaders step up and grip the situation. Lee Iacocca is a brilliant example of a great leader. One that survived the public humiliation of being fired by Henry Ford II, picked himself up and set himself the mission of saving Chrysler.

When looking for role model leaders, look beyond the present. If you do, you’ll find examples like Lee Iacocca. Examples that you can learn from and use to shape your own behaviour.

The Business Transformation Network has posted this article in partnership with the Leadership Forces blog.