I.T. is not I.T. anymore by Mark Aikman

For the last few weeks, I’ve been vigorously wrestling with the changing nature of IT and the role of the CIO. I seriously believe IT is in some sort of mid-life crisis. Or possibly, it’s just about to grow up and get some long trousers.

Last week I got two more good clues about what’s going on. I went to the 2017 CIO 100 celebration evening, where a panel of the leading CIOs in the UK did one of those State of the Nation discussions. The first Line-of-Duty revelation was when Alison FitzGerald, COO at London City Airport gave a very interesting insight. She said “IT is not IT any more”. She meant that it’s no longer an add-on facility that speeds up existing processes, a la 1980s and 90s. Now, she said, it is utterly integral to the business – and the business does not exist without it. Without IT, the doors don’t open, the planes don’t fly, the queues build up and you can’t even get a coffee.

Then, the second lightbulb lit when job titles came up. Some of the leading CIOs at the CIO 100 event were no longer CIOs. Alison FitzGerald, Cait O'Riordan, Shirine Khoury-Haq for example, had all moved on to become Chief Operating Officers. Clearly, CIO-dom had prepared them for running the joint. The COO jobs in these businesses hadn’t gone to logistics people or production professionals or QA gurus. And we have to assume that’s because IT is the beating heart of the organisation they’re in.

So it’s now becoming a bit clearer, this CIO-future-thing. Finally, IT has matured enough to leave behind the image of being just a department or service. We now exert significant influence over what and how our organisations deliver and we can significantly impact business outcomes. We’re now a partner, not a facilitator. It’s time we bought a suit….

Mark was listed in the 2017 UK CIO top 100 and is regularly invited to be a Keynote speaker, conference chair/panel moderator and writes a regular column at horizonbusinessinnovation.com and CEO.digital. Mark’s background spans many verticals such as FMCG, Finance & Insurance, Oil & Gas and Telecommunications, leading major operations and transformations at North Group, BP, T-Mobile, Cadbury Schweppes organisations and is now separating the new Upfield spreads business from Unilever. 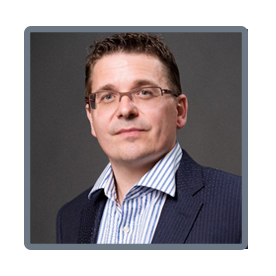