More than two thirds of the people around the world work away from the office at least once every week, and while that statistic isn’t particularly shocking, it tells us that flexible work hours and ‘work from home’ are ingrained into the modern job culture. But, could the set-your-own-hours mentality be stretched further? How about transitioning your organisation into working four days a week instead of the traditional five?

Advocates for the shorter work weeks include Richard Branson because there is proof of its effectiveness. For example, Perpetual Guardian, a New Zealand real estate firm noticed no drop in productivity, a decrease in job stress, and an increase in employee engagement upon implementation of the four-day work week.

The 240 employees who took part in the experiment reported a 7% decrease in a stress levels and a 20% increase in team engagement on average. — Fortune

Perpetual Guardian’s CEO believes the practice should be widely implemented, but he also knows transitioning isn’t easy and business leaders may face resistance from stakeholders who believe in traditional working practices.

“Your leadership team is conditioned to think you have to spend five days in the office, so you have to get them on board and ensure that there’s a proper process before, during, and after implementation.” — Andrew Barnes, CEO, Perpetual Guardian

If you’re a business-leader looking to bolster operational efficiency through organisational transformation, Eko can give you the much needed structure and clarity you need to kick-start and follow through the process. It’s an intuitive, mobile-first internal communications platform that lets you start small and gradually build up to large scale change like the four-day work week — and decidedly push further if needed.

The four-day work week is just one way Eko’s built-in features can be used to structure, track, and manage transformation. 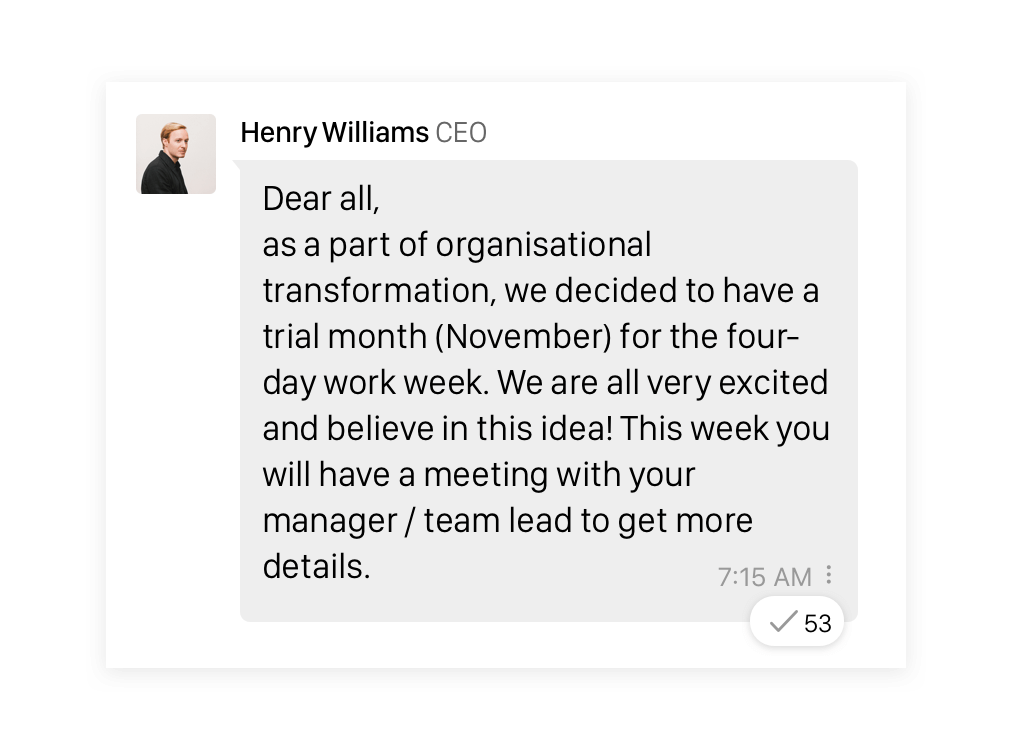 Eko’s Broadcast feature lets you inform your entire organisation of your idea(s), or target specific teams — like upper management — to resolve questions and concerns, and get feedback.

Read receipts let you see how many people have read the message, so you can ensure that everyone is aware of your plans before you proceed.

And if you’re out the office but still need to get the message across you can invite up to 50 employees to a voice call and discuss your next step.

Structure Your Ideas and Execute

Steve Jobs once said “ideas are worth nothing unless executed.”

Eko’s Topic feature lets you create unlimited threaded conversations around the four-day work week so promising suggestions don’t get buried under countless chat messages or a never-ending email thread. You can send voice messages, photos, videos, and documents within Topics if needed. 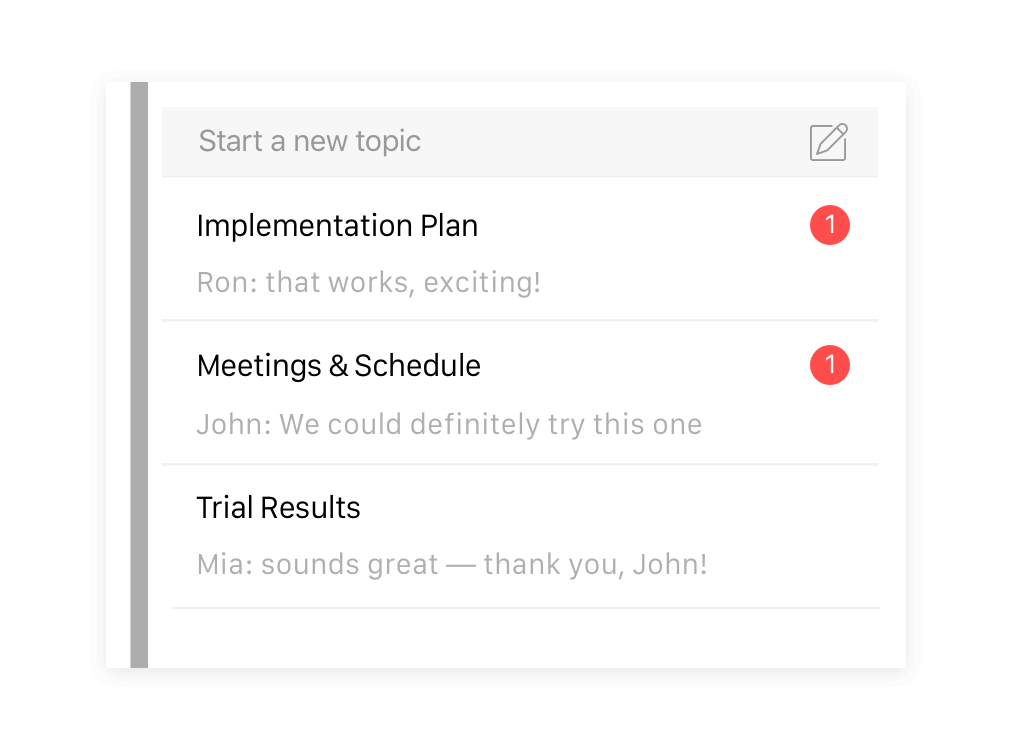 After you’ve identified the steps you need to take to transition to the four-day work week, you can turn key takeaways into Tasks — with detailed checklists and priority levels — which you can assign to individuals or entire teams. You can then track Tasks, turning Eko, the communication platform, into a project management tool.

Once your plans are underway, you can work on digitising forms and processes, like leave requests, expense reimbursements, or staff assessments with Eko’s Workflow feature. 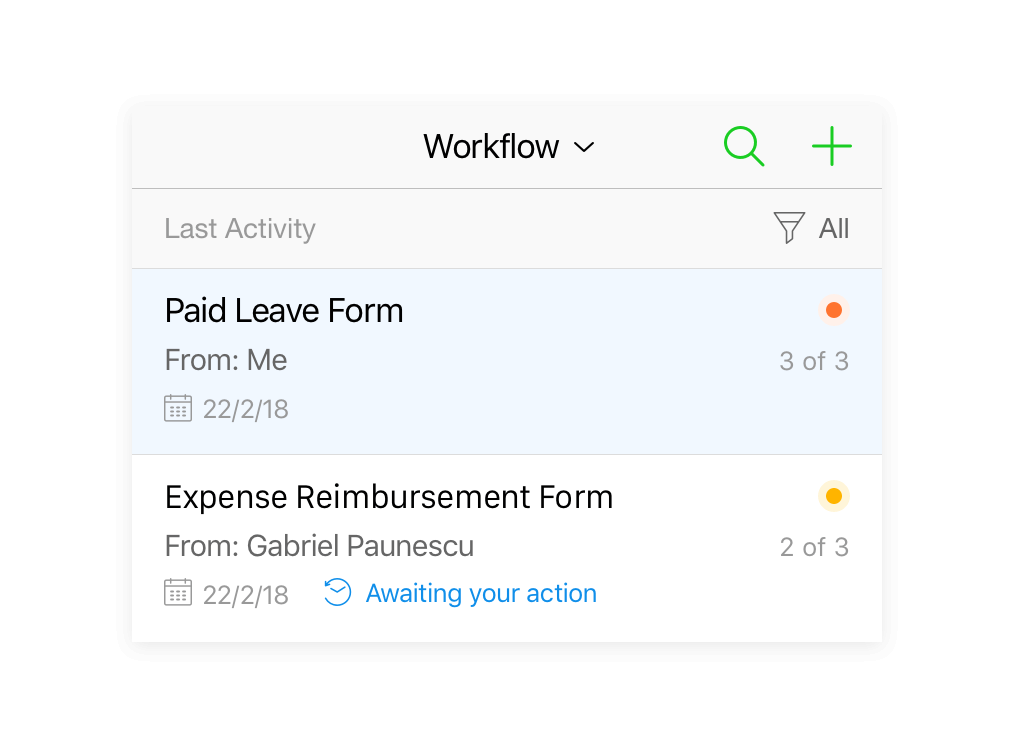 Approvers can sign on forms and flows through the e-signature feature, which progresses from one stage to another, automatically. This makes it especially useful for remote and on-field workers like sales personnel who cannot step into the office due to the nature of their work.

Making major changes to the way your company operates isn’t as simple as making an announcement and hoping for everything to fall into place. You must build a strategy that not only inspires, but gets everyone on board. Doing so requires you to account for your employees, industry, and nature of work. Ultimately, the process is all about constant experimentation, tracking, analysing, identifying, and tweaking until you find a framework that fits.

The Business Transformation Network has shared this article in partnership with EkoApp.