Employee Engagement - Whose Job Is It Anyway? 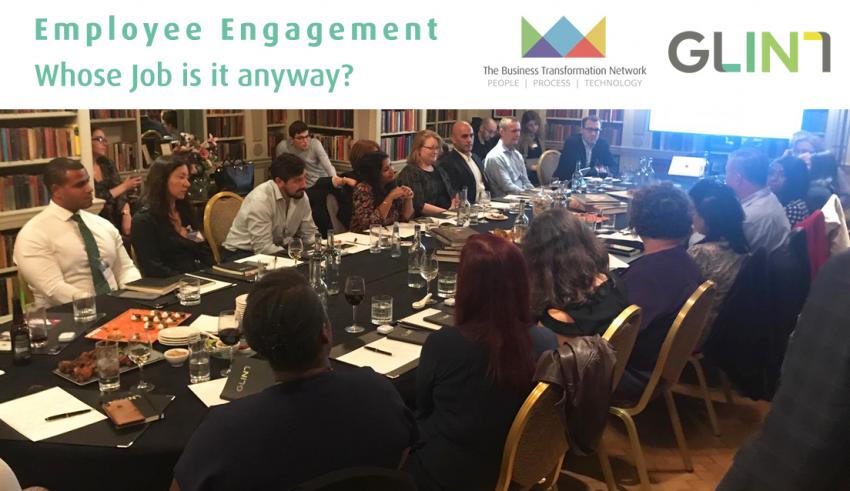 The Business Transformation Network recently hosted an event on "Employee Engagement - Whose Job Is It Anyway?" in partnership with Glint, at the Bloomsbury Hotel in London.

The conversation was open and varied, touching on a wide variety of subtopics including:
1. Why do we need employee engagement?
2. What happens if employee feedback isn't acted upon?
3. Whose role is it to drive action taking when it comes to employee engagement?
4. What is the role of HR in businesses today and where can it go?

Why do we need employee engagement?

A recent study on employee engagement (from ADP Research Institute: Hayes, Chumney, Wright & Buckingham, 2019) found that an unbelievable 84% of workers globally are merely "coming to work", and are predominantly 'coasting' through their working lives. This means that our organisations are less productive and potentially less profitable from the lack of engagement. So how can we counter this? There are multiple approaches to improving engagement, from changing internal processes and culture to adopting a people success platform (like Glint), but your organisation needs to understand where its particular challenges lie to know what will work best.

What happens if employee feedback isn't acted upon?

With the state of engagement globally leaving much to be desired, the need to improve employee engagement at an organisation should be clear: without the employees, where would your organisation be? Increasingly, data shows that companies who listen to employee feedback achieve better engagement, and better business outcomes.

For evidence: In 2018, Glint conducted a study of employees whose managers were given access to results and action planning tools and whose attitudes were measured in May and again in November 2018. Employees whose perceptions about action taking improved from either unfavourable or neutral to favourable saw an increase in their engagement score by 7 points (out of 100), whereas those who remained the same — either at unfavourable or neutral— saw their engagement scores drop by 4 points, resulting in a net difference of 11-points.

The room agreed that the common issue with employee engagement in businesses today is that the process is too slow and that the feedback often seems to go unanswered. Attendees discussed the detrimental effects of not acting on feedback from employee surveys: sending a powerful message that the people don't matter to you and leaving employees to make up their own mind about the reasoning behind it. The ultimate result can be a negative corporate culture. There was a referral to the Hawthorne Research and how some organisations are finding that if you ask for advice but don't act on it, you will lose a lot of your employees. Furthermore, if you ask advice, you must be prepared and bold enough to act upon it; if you’re not prepared to act on it, perhaps it’s better to wait and survey when you’re ready to respond to the feedback.

The reality of tackling employee engagement is that, ultimately, you are dealing with human beings who may take feedback personally and not feel comfortable addressing feedback with their teams. This could be down to the nature of the manager, but it could also be that they just lack the fundamental training for how to be accountable to feedback without taking it personally. There was a general agreement in the room that it is surprisingly common that managers are in their role because they're good at their function, but not necessarily equally good at people management. In this case there is a different area of training needed to support managers to act upon the feedback they’ve been given.

Whose role is it to drive action taking when it comes to employee engagement?

For the majority of organisations ownership of employee feedback and related actions sits in HR, but should it really be there? The general consensus around the room was that employee engagement should not be siloed within HR but shared with the wider senior team - and if it does stay within HR then buy-in from the C-suite is essential. Having said this, while the initial drive should sit with senior leaders, the employees are equally responsible for participating in the process, because feedback and the ensuing conversation should be a two-way street. After all, they should believe they have a stake in the organisation and will benefit from changes made due to their feedback.

At a more strategic level, it was proposed that HR and employee engagement haven't necessarily evolved with the rest of the business world, instead of sticking with more traditional and 'clunky' processes and technologies. That said, we should aim to modernise the internal relationships within an organisation using a ‘fast fashion’ model, with a snappy turnaround time for feedback data and giving the employees information quickly. One model suggested is to value and treat employees with the same respect and attention as your customers. In this way, organisations can begin to integrate employee initiatives into the business discussions about the bottom line – where, like it or not, many organisations are focused.

The attendees continued the conversation with a proposal: If organisations want to truly improve their employee engagement levels then the change needs to start at the top, because if the leaders don't believe it can help, then they can't, or won't, enforce it. Participants noted that there are sometimes cultural issues contributing to their leadership's ironic ‘disengagement from employee engagement.’ t is often the case that changing culture is left to HR - but as one of the most process-driven departments within an organisation, this often means nothing changes despite good intentions. For HR to lead this type of change, they need to become more flexible and modern by removing some of the rigid processes, and the general 'fear culture' that a number of employees experience, which has been an issue for HR for decades. We assume we’re dealing with rational adults at work and so we must treat employees as such (and HR can and should lead on this), so we need to start giving them the freedom and responsibility that they can handle.

What is the role of HR in businesses today and where can it go?

It was the consensus of the group that in businesses today, HR is generally perceived as the function putting a process around a problem, but without necessarily dealing with and solving the problem. HR needs to continue to shift from administrators to facilitators that are helping two colleagues (one with more power than the other) to have a meaningful and transparent conversation about how to solve a problem that has the potential to affect customers.

Rather than simply administer a survey, the role of HR should be to act as a mediator and coach for managers digesting feedback from their employees, giving them the research and feedback already deciphered and grouped as they need to see it to respond with appropriate actions.

In short, engaging your employees is a lot more important than the majority of organisations seem to see it as. 85% of the room agreed that having a more engaged workforce would make your organisation both more productive and more prosperous in the long and short term. The most common mistake that organisations struggle to get past is embracing the feedback that they've received from their employees and taking action on it quickly.

To move forward organisations need to create or invest in a way of engaging employees through surveys and feedback, which are: quick to conduct, have a speedy turnaround time, and allow them to take action instead of simply making action plans.

Keep your eye out for more events like this at www.thebtn.tv/events

This event write-up is exclusive to The Business Transformation Network.