Business transformation is a challenging endeavour, we all know that. If it isn’t, then you’re probably not transforming. Engaging people early on and setting expectations is really important, as I once said out of a bit of desperation, ‘the transformation fairy isn’t going to just turn up and magic this all into place you know’

So, what’s it like driving transformation? The story I tell to answer this question is from when I was involved in a sponsored plane push. A number of us turned up at the airport expecting to push a relatively small plane. What we were confronted with was absolutely huge. All of us, to a person, thought ‘we’ll never move that!’ We had a guy there who was our coach and he assured us that this was totally possible, that it had been done many times before, explaining that we all had to work together but that it wasn’t just all about pushing hard, it was knowing when and how to push. He said that he was here to help and that it would be a great feeling when the plane was moving up the runway. We thought he was mad.

He went on to explain that he needed all of us to put maximum effort in, in a co-ordinated fashion, when he gave the signal. He told us to initially not expect much, maybe just a tiny movement. He explained that after pushing we had to stand back as the plane would roll back slightly in response to the pressure we’d applied. He said to let it rock back and as it stopped we were to apply the force again, then let it rock back and apply the force again (those of us of an age, will remember bump starting a car… same principle). Having given this explanation, he assured us that eventually it would break free of the inertia and head up the runway. We were all still sceptical, but now felt quite motivated to give it a go, he seemed to know what he was on about after all.

So, off we went. He gave the signal, a loud shout of ‘push’, and we lent into the plane. It kind of rocked forwards a little and then immediately back, nearly knocking us all over. He stopped us there and explained the method once more. We got ready to start again, another loud shout, a massive co-ordinated push and then a stand back to accept the roll back and then push again, rollback and push, roll back and push. We repeated this a few times when suddenly, to our amazement, the plane started to move forwards, without rocking back. The sense of elation was palpable, it was a real high. We were pushing this huge aircraft. He then told half of us to disengage and again to our surprise, half of the group were more than capable of keeping the momentum going. The plane trundled up the runway actually gathering pace. The people left behind were shouting to those still pushing; ‘remember to let go before it takes off’. That morning is well lodged in my memory, it was such a lesson in leadership and teamwork, and also lots of fun.

I guess I don’t need to explain this analogy line by line, but this story is so illustrative of large-scale business transformation:

Once things start to move the feeling is amazing; as one of my colleagues put it, ‘it feels liberating’. And this is one of the key benefits of transformation; you unleash the talent of your people, giving them the environment, tools and culture to enable them to do their best work.

Harvey is a Chartered Fellow of the Chartered Management Institute and a regular blogger/speaker and lives with his wife and family in County Durham, England. 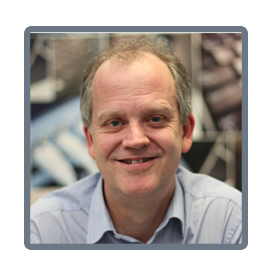 Changing what we sense is valued, changes culture by Karen Walker
Read post
So, You Want to Change the Culture by Edwina Pike
Read post
How to Build a Successful Leadership Development Programme
Read post
A Flipper or a Chef? by Arnab Banerjee
Read post