Are You on the Hedonic Treadmill? by Roderic Yapp

The Hedonic Treadmill, Happiness and Leading by Example

One of the things that makes leadership such a tricky subject is that it is all about behaviour. It is about what you do every single day.

What you say matters but if it is undermined by your behaviour it becomes irrelevant.

This is why I am a strong believer in the concept of leadership by example.

An organisation’s culture and its performance are a reflection of the cumulative leadership behaviours in that organisation.

So I think it’s helpful for leaders to consider their own behaviour. Consider what is working, what isn’t and what they want to do differently.

Models can be helpful in shaping our thinking. They give us something to reflect upon and challenge our own behaviour against.

The phrase Hedonic adaption was first coined Brickmann and Campbell’s essay, ‘Hedonic Relativism and Planning the Good Society’ (1971). It was further developed by Michael Eysenck who wrote about the Hedonic Treadmill.

This article will briefly explain the concept and challenge you to think if and how it applies to you.

The basis of the theory is that we all have a ‘set level of happiness’. 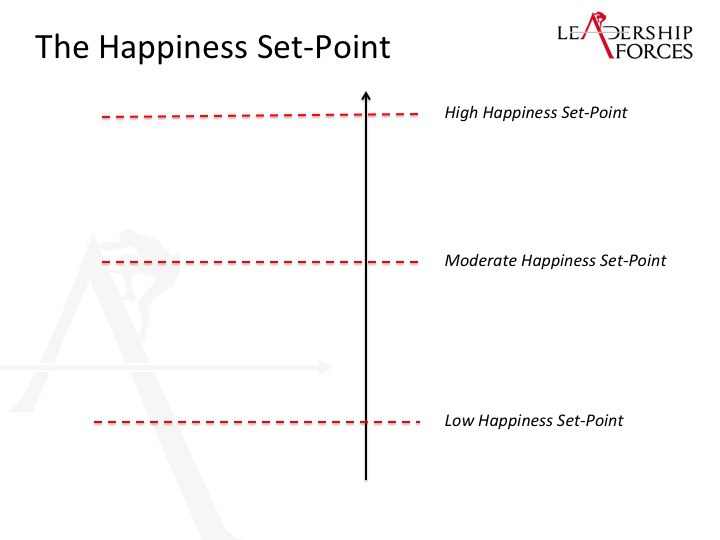 Naturally, this differs between people. Some people have a cheery outlook on life. They are grateful for what they have and they don’t complain very often.

Other people have a lower set-point and are constantly miserable. The majority sit somewhere in between. 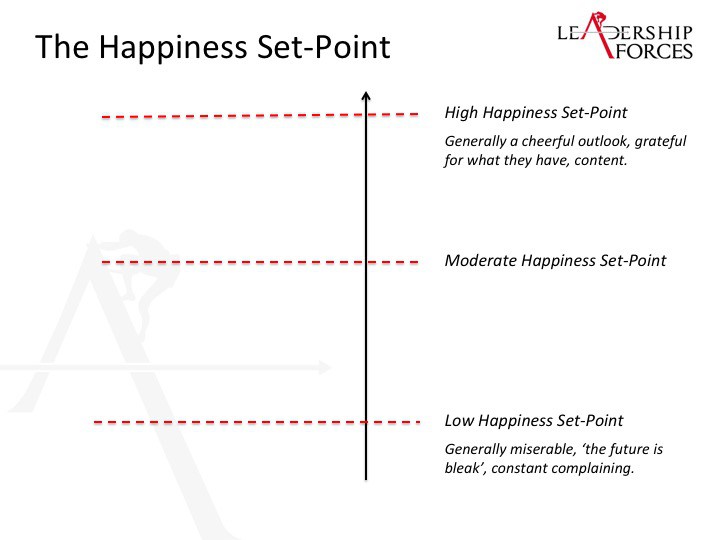 We like to think that happiness is driven by external stimuli.

If only I won the lottery, I’d solve all my problems.

If my boss wasn’t such a bastard, I’d enjoy my job.

But the reality is that isn’t true.

When compared with a control group, the study found that the event (winning the lottery/the accident) had a short-term impact on the individual’s happiness but after a period of time, most people’s happiness level regressed to where they were before the event.

Put another way, people who were miserable before they won the lottery, were still miserable after they’d won it!

It is about you and how you perceive the events in your life.

It’s about the stories you tell yourself.

For instance, do you compare yourself to the neighbour with the new Range Rover or the person with the terminally ill child?

Which comparison leaves you feeling happier?

Which do you normally use?

Anna Vital puts together some brilliant infographics but this has to be one of my favourites. 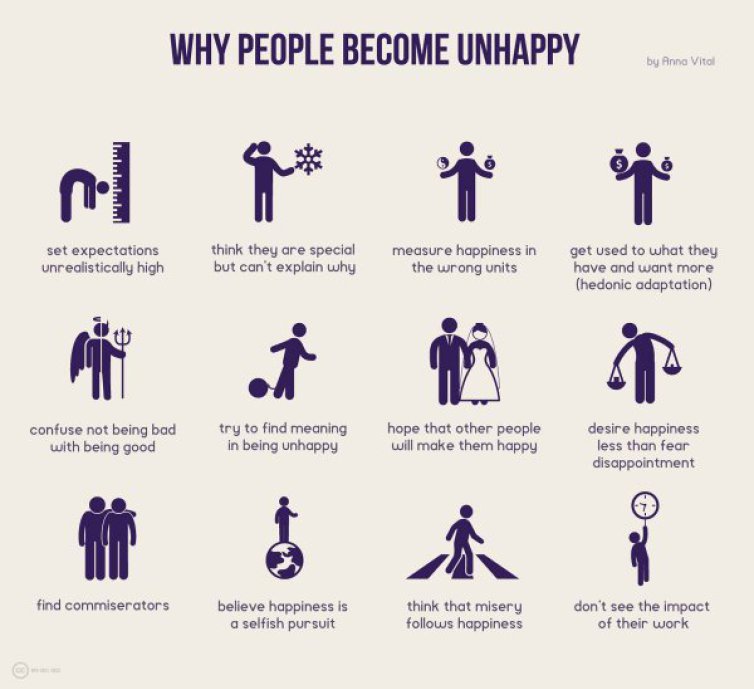 These are some of the reasons that people become unhappy. It’s worth reflecting on them from time to time to see which ones you are ‘at risk of’ and which ones might be impacting your mood.

This is about knowing oneself. Knowing the flawed thinking patterns you can get into that drive the wrong sort of behaviour.

The Hedonic Treadmill and ‘Financial Freedom’

For example. If you measure happiness financially, you’re likely to work hard to climb the corporate ladder or grow your business.

As your income climbs, it can be easy to adjust your lifestyle in line with your income.

Put another way, higher earners tend to have higher costs. This can become a vicious circle as the ‘things you own start to own you’. 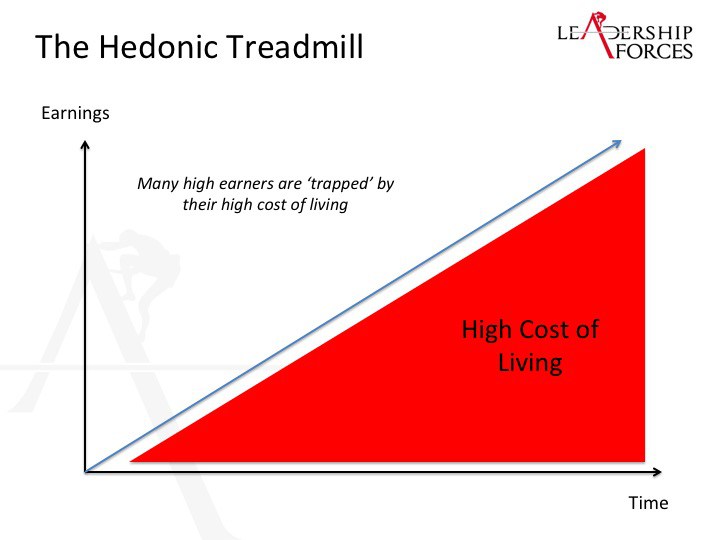 The latest Range Rover comes out and you feel you have to have it. You’d like to make a career change but you can’t because you’ve got the ‘golden handcuffs’ on and can’t afford to take a pay cut.

This is what it is like to be on the hedonic treadmill – and unless you work out what truly matters to you, you’ll be on it until you retire.

Below is an example of someone who doesn’t succumb to the latest trends, who doesn’t need the latest car or the expensive holidays. They have the discipline to maintain a low cost of living well beneath their earnings which creates an element of freedom. They can take some risks and perhaps leave their job to do something they enjoy because they’re not trapped in a cycle of needing to earn a lot of money. 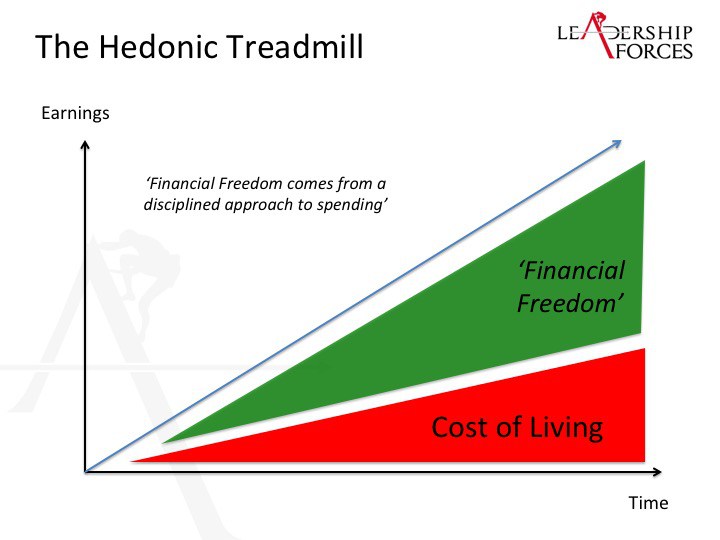 I should mention that this is all relative. Some people earn enough to just about get by and cover their costs. I am not going to pretend that I understand what that is like. For these people, an increase in earnings might remove their concern and worries about money. Not having to worry about money, could shift their happiness set-point over the long-term.

The point I am trying to make is that happiness is rarely driven by external stimuli. There is no correlation between earnings and happiness. There are plenty of people who just about get by who are happy and plenty of wealthy people who are miserable.

The key to happiness is largely connected to knowing yourself.

Knowing what makes you happy, knowing what doesn’t and making decisions in line with what you value.

Your outlook on life, whether cheery or despondent, has an impact on people.

Understanding this fact. Knowing yourself and making decisions in line with what makes you happy is essential if you want to be a leader that has a positive impact on the people you lead.

The Business Transformation Network has posted this article in partnership with the Leadership Forces blog.