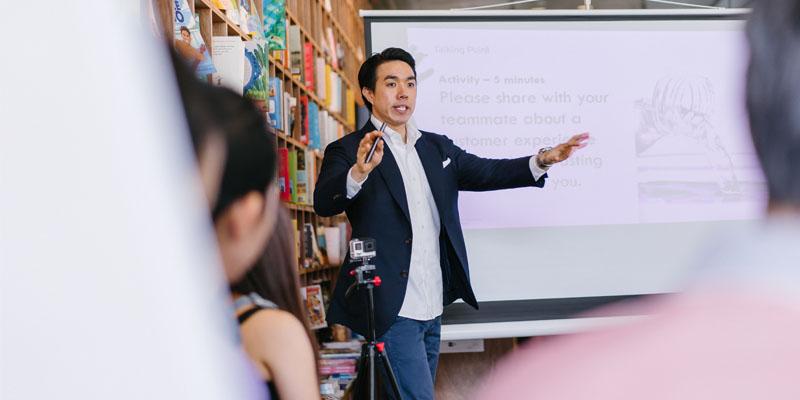 Many times, in an interview after a game or event, a sports coach indicates that their team needs to improve a specific aspect of their performance. The sports coach then develops an improvement plan for their team based on the game just finished. The same is true of agile teams. An effective agile coach does the same, analyses team performance and decides what the team needs to do to improve their game. The coach prepares a plan to discuss with the agile team to reach an agreement regarding improvement goals.

Just as with sports teams, developing a coaching strategy for an agile team takes time to prepare.  A good coach’s plan gives structure and de-risks the delivery during the coaching activity. Having a plan helps to inform the team, the leaders or managers of the team members and sometimes others, of the changes the team feels they need to improve performance. It provides everyone with an awareness of the journey so that they may enable and support team members during the development process.

Adopting agile is a significant endeavour and typically coaching is undertaken while operational activities continue. It is, therefore, essential that a coach’s plan is seen in the light of minimising the risk to current business operations. Using an evidence-based approach encourages the coach and the team to consider the science or the agile wisdom on which they are planning to build their improvements. It clearly presents the reasons why the proposed actions will succeed.

A coach’s plan sets out an intention for several intervention activities and gives structure to the coaching activities. It starts from a generic “first meeting” situation and builds through kick-off and ongoing team development. Modified regularly; the plan identifies the need for coaching and training over time. Initially, this plan will be generic; however, with each iteration, the coach’s plan will become unique to the needs of a specific team. Over time the coach’s plan will increasingly be based upon their observations of the team and the coach’s health check analysis to identify improvement activities.

Some coaches keep a coaching diary for each of their teams. A coaching diary or log is a simple way for you to debrief after every interaction with a team. It not only helps you understand the situation of your team, but it also helps the coach to understand themselves as well. In that, the coaching diary can provide relevant input to the coach’s reflective practice.

Maintaining a coaching diary allows the coach to reflect on team maturity and plan the coaching and record the impacts of each activity. An attendance record enables the coach to identify the coverage of the intervention and allows the identification of a team member who may have missed the training or coaching activity.

I am not suggesting that the agile coach would record every observation or each interaction in every scrum, although some may find this useful. I am suggesting that the diary records each significant coaching activity with its associated results. This serves to mark the nature of the intervention, the style used, the desired outcome or competency improved.

A Coaching Plan is made up of a series of planned interventions based upon a training needs analysis or observations.  The plan may be prepared following a retrospective or an Inspect and Adapt event when the team has decided on some improvement objectives. I have found that taking time to think through a proposed intervention with a team more than pays back in terms of performance gains. Creating a simple document for each intervention, like the one below, clarifies the intention and presents an opportunity for peer review from other coaches using XP principles. The coaching plan has three steps. Science (The wisdom supporting the intervention) 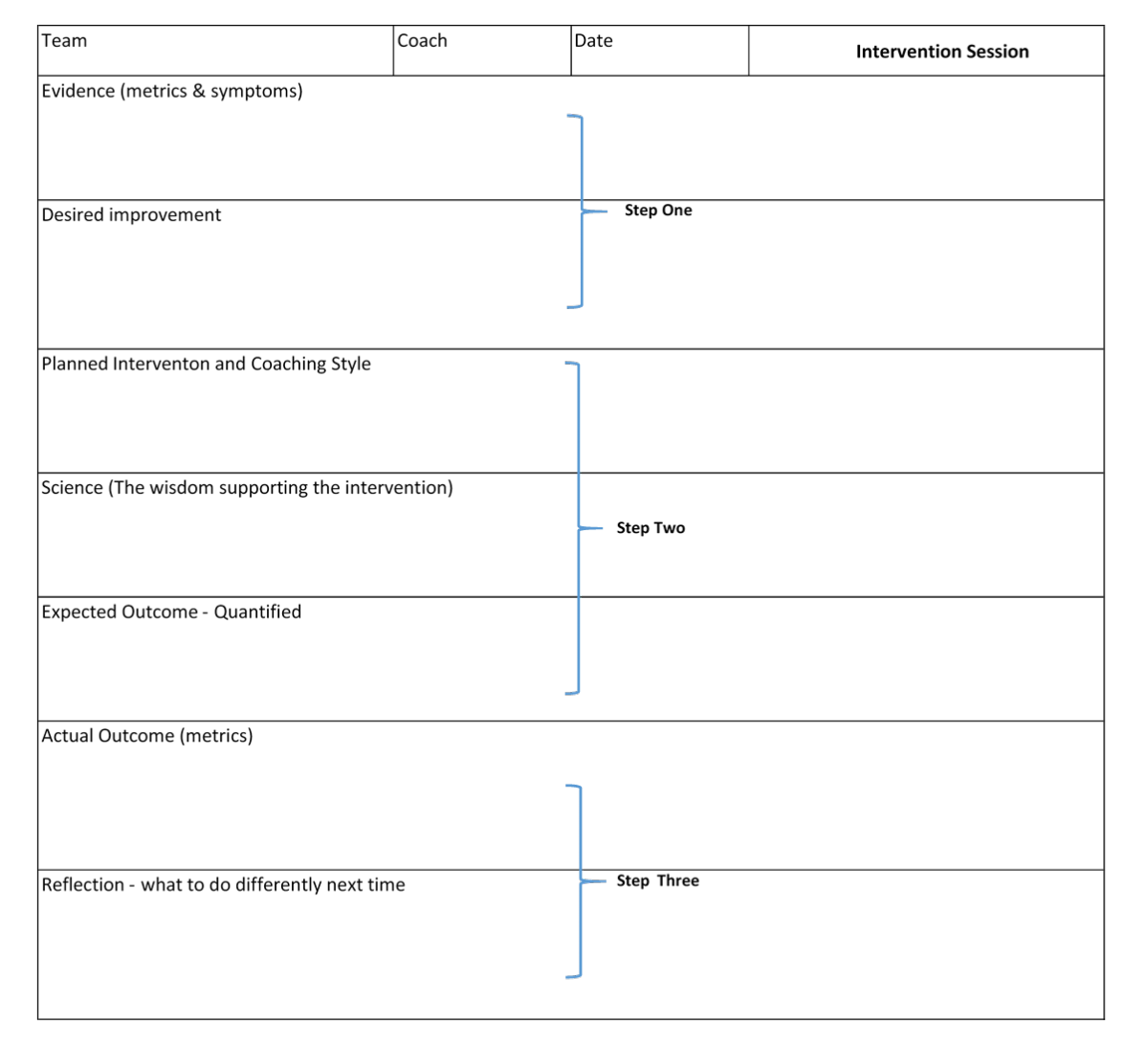 Step One - the start-point of any coaching, sport or otherwise, is to identify the nature of the desired improvement. The first two sections of the Coaching plan are designed to identify and where possible quantify, the challenge or area for improvement. The first section places the improvement in context; describing the symptoms of the problem and the impact on the metrics. The second section the desired improvement may refer to discussions in the Service Review, Sprint Retrospective or the Inspect and Adapt event. Eli Goldratt said in his book The Goal, always look for deeper causes of the observed effect or effects. He called this ‘Scientific thinking’.  An agile coach could also use a five whys technique to establish the root cause before leaping to a solution. It is crucial to design the intervention to address the root cause rather than the symptom. Although in some situations it is politically and expediently necessary to address both.

Step Two. Is where the coach is designing the intervention and setting out the expected outcomes. The third section describes the nature of the intervention planned and the coaching style proposed by the coach. Lyssa Adkins in “Coaching Agile Teams” sets out four intervention styles of coaching. These styles broadly mirror Hersey and Blanchard’s Situational Leadership Model with interventions ranging from teaching through mentoring and facilitating to professional coaching. Situational Leadership suggests changing the intervention style based upon the maturity or experience of a team. With a new team, a coach would spend time teaching, whereas teaching would be less appropriate for an experienced team. It is essential to record the coaching style used as this will have a direct bearing on the outcome of the intervention.

Section four explains based on agile science why the intervention planned will resolve the challenge faced by the team. There is a vast array of wisdom in the Lean, Agile and cultural change space. Sometimes a coach needs to remind themselves of the principles, theories, techniques, and practices to establish the most appropriate intervention to make. If the team has identified the desired improvement in a retrospective or Inspect and Adapt activity, then they may have made some assumptions regarding the beneficial outcome that they anticipate from the changes. Their assumption could be in terms of increased capacity, velocity or whatever. If expectations or anticipated improvements can be identified and quantified, they should be noted in the expected outcome section of the plan.. Referring to the Science or Wisdom will allow the coach to verify or meet the team’s assumptions by the design of the selected intervention.

Step Three: the last two sections are really for the coach’s use, and they completed after the intervention and are the foundation of self-improvement using reflective practice. Reflective practice is a kind of coach’s retrospective. In its basic form, it is about it is thinking about a coaching intervention, the outcome, and how the coaching could be improved for the next intervention.

Reflective practice is the ability to analyse to continue to learn and enhance coaching skills.  The coaching plan and coaching diary provide inputs to the coach’s reflection. The reflection could be a shared activity, working with other coaches, or it could be self-analysis. There is much more to Reflective Practice than is contained here. It is worth a coach taking the time to investigate this subject in greater detail.

Using reflective practice is a practical example of double-loop learning[i] , as suggested by Chris Argyris; the technique allows the coach to scrutinise the theory with the application. What outcome was expected compared to the actual result?  The purpose of Reflective Practice is to change or improve underlying assumptions, values and behaviours of the coach. Its use enables the coach to deal with real and complex situations exploring and adapting their style and type of intervention depending upon the circumstances they encounter.

This white paper is an extract from my book, The Agile Coach’s Cookbook. The Cookbook is a series of recipes which an agile coach can use individually, with a team, a programme or if leading a transformation. The theory, tools and techniques have been gathered over the years to improve results through better coaching.

The coaching plan presented in this paper is applicable in any circumstance where an agile coach is planning an intervention with anticipated or desired outcomes.

With thanks to Ziaan Hattingh who spent his time to improve this paper.

A Change Management expert for over thirty years- Jon believes in contextual agile. Rather than using a single framework or set techniques, Jon introduces appropriate ways of agile working enabling organisations to achieve their strategic goals. For Jon, this contextual focus involves tailoring agile approaches and blending them sometimes with traditional techniques. For example; recently, Jon combined Benefits Management approaches with components from SAFe and Disciplined Agile. Consequently, Jon has a reputation as a pragmatist; and for implementing agile ways of working, which increase performance and productivity. Jon is a director with Beneficial Consulting based in London, UK. 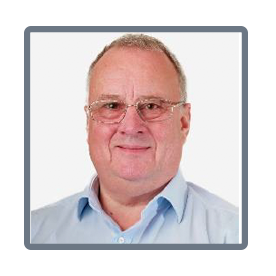 In Part 2 of this series around Business Mindset 2030 in partnership with Peoplesmart,...

Read post
Where are we now? A global snapshot of mental health at work

Change doesn’t just happen. Sure, many more organisations are now alive to the power of supporting employee wellbeing. But actually, etching this...

As we continue this fascinating series around Business Mindset 2030, in partnership with Peoplesmart, we bring you...